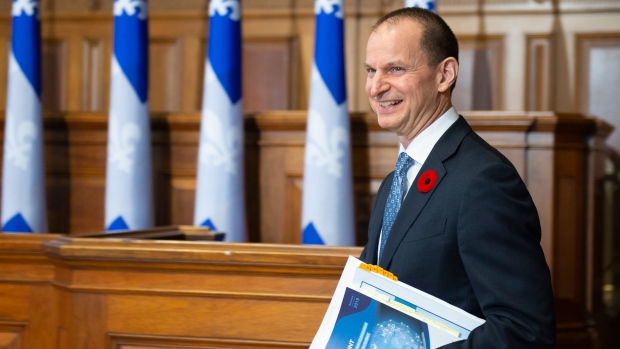 Quebec's economy is humming, allowing the government to shower Quebecers with more than $850 million in extra spending this fiscal year -- mostly on families with children -- and pay down billions of dollars of debt.

The province should finish the 2019-2020 fiscal year with a $1.4-billion surplus, fuelled by a 2.4 per cent increase in GDP in 2019 -- 0.6 per cent higher than the growth rate forecast in the spring budget, Finance Minister Eric Girard announced Thursday.

But the official surplus figure is misleading.

With revenues of roughly $117 billion, Girard is actually projecting a surplus of more than $4 billion for this fiscal exercise. Girard transferred more than $2.5 billion of that surplus cash into a special fund dedicated to paying down the province's gross debt, which stood at nearly $200 billion as of the end of March.

"Quebec's economy is doing remarkably well," Girard told reporters after presenting his economic update. "When you look at the last four years, the (total) surpluses have been in the order of $12 billion, and all that was put towards reducing Quebec's debt burden."

Despite the strong economy, Girard noted that Quebec's debt burden is the second highest in the country, with gross debt representing roughly 46 per cent of GDP.

The government is advancing by two years a commitment to give more money to families with children.

Beginning in January, Girard said roughly 679,000 Quebec families will get, on average, an additional $779 a year. The extra money ranges from about $250 a year for families with one child to about $2,100 for families with four children or more. Roughly 250,000 families in Quebec will not qualify for the enhancement as they already receive the maximum.

Girard is also cancelling the extra payments wealthier families had to pay for subsidized daycare spots, making the change retroactive to Jan. 1, 2019. All parents, regardless of income, will pay $8.25 per child per day for daycare, representing on average a savings of $1,100 a year for 140,000 families.

Another crowd-pleaser announced Thursday was the promise to reduce much-criticized hospital parking fees. Starting in the spring of 2020, the first two hours will be free at hospitals across the province followed by a daily rate varying between $7 and $10.

The total additional spending this fiscal year, above what was budgeted last spring, is $857 million.