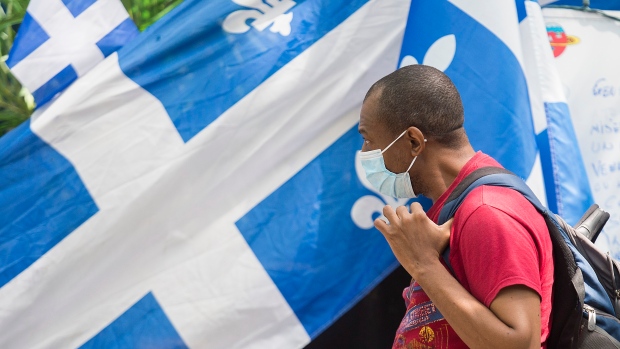 A man wears a face mask as he walks by a house adorned with Quebec flags on St-Jean Baptiste Day in Montreal, Wednesday, June 24, 2020, as the COVID-19 pandemic continues in Canada and around the world. The Canadian Press/Graham Hughes

Quebec, the Canadian province that has suffered more cororonavirus deaths than 43 U.S. states, has emerged from the first stage of the pandemic with a new plan: less lockdown, more investment.

The province has a long history of jumping to the rescue of its homegrown firms. In the COVID-19 era, that commitment means the government will become a shareholder of more companies, Quebec Economy Minister Pierre Fitzgibbon said in an interview.

“Governments in general in the world will be more interventionist in the economy because of the requirements to inject some capital,” Fitzgibbon said. “In some instances, we’re going to need to own some equity.” Potential future equity investments include Aldo Group Inc., a global footwear retailer based in Montreal forced into court restructuring by the crisis.

Quebec’s approach puts it closer to some European countries than to its own federal government; Canada’s Prime Minister Justin Trudeau has resisted calls to bail out firms such as airlines. Still, the province has no intention of managing the companies it invests in.

The government has recently acquired preferred shares in private companies, Fitzgibbon said, declining to name them. “We’d be minority for sure and hopefully at one point we can be replaced by other equity holders,” he said.

The pandemic ravaged greater Montreal, killing more than 4,000 people in the region as it tore through care homes for the elderly. That forced the government of Premier Francois Legault to take stricter lockdown measures than most other regions in North America. The government estimates that 40 per cent of the economy had to shut down and unemployment spiked to 17 per cent in April, the highest of any province.

While the virus now appears under control in Quebec — on Monday it reported no new deaths for the first time in three months — the lingering effects of the shutdown are a threat to many downtown businesses in Montreal, Canada’s second-largest corporate center after Toronto. The government sees the provincial economy shrinking 6.5 per cent this year and has projected a $15-billion deficit.That includes a $4-billion provision to address a second COVID-19 wave, after $6 billion of virus-related costs so far. Fitzgibbon’s view is that businesses could adapt to another virus spike, having changed their sanitation practices and their work environments.“One would conclude — maybe I’m naïve or too optimistic — that under a second kind of wave, we could allow people to work,” though perhaps at a lower rate than normal, he said.

As devastating as the crisis has been, it has created favorable terrain for Legault to apply his nationalist agenda. Nurturing and protecting local companies is part of the provincial political culture, with the powerful pension fund playing a key investor role. The health threat has tightened social unity in a province that cherishes its distinctiveness from the rest of Canada.

Last month, Fitzgibbon agreed to a US$200-million loan to help relaunch debt-laden Cirque du Soleil Entertainment Group, with a clause allowing the government to buy the stakes owned by non-Quebec shareholders at some point. The province also embarked on an uphill battle to chip away at Amazon.com Inc.’s position with a campaign to encourage Quebeckers to buy online from local firms instead.

A lack of innovation hurt the province’s retail sector when the pandemic hit. Only one in five Quebec retailers offers online transactions and Fitzgibbon says getting them ready for e-commerce is a priority. Online sales in Canada jumped 120 per cent from a year ago in April as retail stores closed for the pandemic.

“I want to make sure we got the programs to move them into the digital world,” possibly through loans, Fitzgibbon said. “We need to have our retailers being able to electronically transact — otherwise we’ll lose to companies I don’t need to name.”

In an era if rising protectionism, Fitzgibbon is paying particular attention to maintaining good relations with Canada’s closest trade partners. Tensions flared with the Trump administration in recent years, including over steel tariffs and a trade spat over Bombardier Inc.