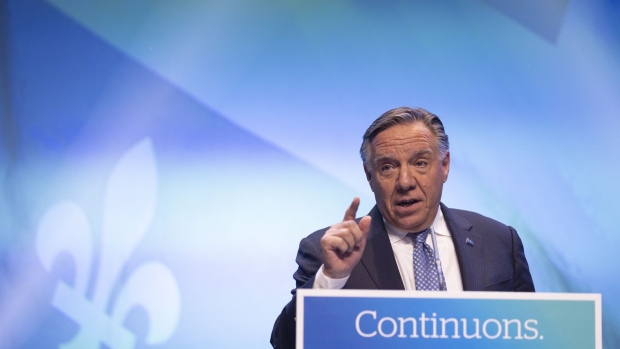 Francois Legault, Quebec's premier, speaks during a Coalition Avenir Quebec (CAQ) party election night event in Quebec City, Quebec, Canada, on Monday, Oct. 3, 2022. Inflation, acute healthcare problems, climate change and the rise of gun violence in Montreal are issues in play, but immigration and language could always resurface as they are wedge issues in Quebec. , Bloomberg

(Bloomberg) -- Voters in Quebec set a record by electing women to 46% of the seats in the legislature, the highest ever for a Canadian province.

The previous record was 43% in British Columbia’s election in 2020, according to Equal Voice, a Canadian non-partisan group dedicated to encouraging political participation by women. At the national level, 30% of the electoral districts in the country’s House of Commons are represented by women.

Quebec Premier Francois Legault, whose center-right Coalition Avenir Quebec party won a second term with a large majority, used a Tuesday news conference to tout that nearly half of his party’s successful candidates were female. “A great pride is that we elected 41 women, 13 more than in the last election,” said Legault, who was criticized during his first term for not having a gender-balanced cabinet.

Seventeen women from other parties were elected on Monday, for a total of 58 out of 125 seats. Dominique Anglade, head of the Quebec Liberal Party, will be leader of the opposition in the legislature, known as the National Assembly.

“I think the fact that Quebec has had an excellent childcare system in place for several years probably makes a difference to women’s participation in all kinds of work, including in politics,” Eleanor Fast, executive director of Equal Voice, said in an interview.