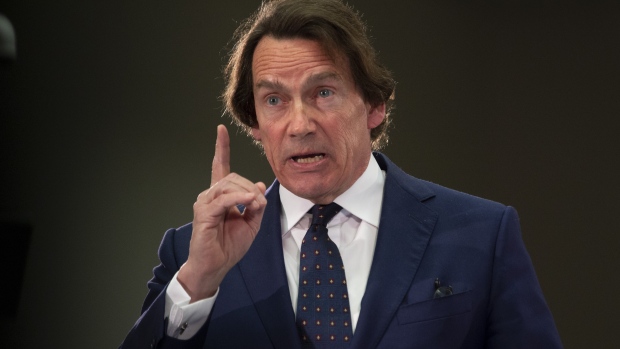 Quebecor CEO Pierre Karl Peladeau makes a point as he speaks during public hearings at the CRTC in Gatineau, Quebec, Wednesday April 17, 2019. , THE CANADIAN PRESS/Adrian Wyld

Pierre Karl Peladeau, who says he owns about 1.6 per cent of the outstanding shares of Air Transat's parent company, says he plans to vote against the $18 per share offer by Canada's largest airline, saying it is "contrary to the public interest."

A vote Friday must secure the support from at least two-thirds of Transat shareholders.

Peladeau says in a news release that the deal goes against "the best interests of (Transat AT), its employees, Quebec consumers and the Quebec economy" since Air Canada (AC.TO) would control 60 per cent of the market, an unacceptably high level that would hurt competition.

The businessman and former politician says he has "gathered around him strong and established partners of international renown" in order to submit a possible proposal he says would be fair, without mentioning a price.

Transat's largest shareholder with a 19.3 per cent stake, Letko, Brosseau and Associates, says it would support Air Canada's offer, after earlier rejecting it when the bid was $13 per share.