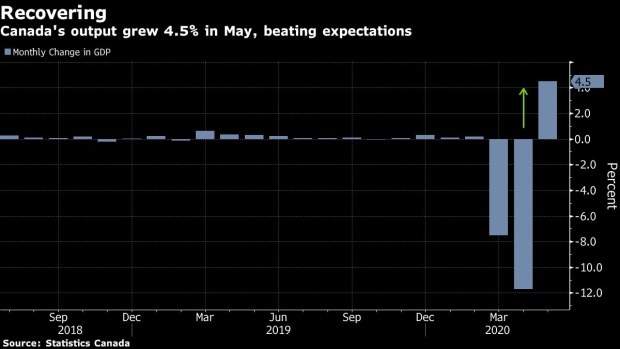 Canada’s economy has made up almost half of its historic contraction since the height of the pandemic, Statistics Canada reported Friday.

Gross domestic product expanded 4.5 per cent in May, the agency said in its first full release for the month. June was even stronger, with the statistics agency reporting a flash estimate of another five per cent increase. Cumulatively, GDP has increased about 10 per cent in the two months, after falling more than 18 per cent in March and April.

The report confirms Canada’s economy has experienced a sharp recovery since emerging from nationwide lockdowns. At issue is whether the rebound will be sustained. Bank of Canada policy makers have already warned the initial resurgence will probably taper off in the second half.

Based on the flash estimate, economic activity in June was about 90 per cent of output levels recorded in February. At the nadir of the recession in April, output levels were about 82% of pre-pandemic levels.

That’s “still a big gap by any historical comparison, but this also marks a quick rebound,” Brett House, deputy chief economist at Bank of Nova Scotia, said by email.

Even with the May-June increase, the second quarter will go into the books as probably the worst since the Great Depression for Canada’s economy. Based on June flash estimate, economic activity in the quarter was down 12 per cent from the first three months of the year.

That’s about 40 per cent at an annualized pace, according to Bloomberg calculations, which is roughly in line with economists’ projections. South of the border, the U.S. posted a 33 per cent contraction in GDP for the second quarter annualized, the most on record.

“While such a decline was expected, it was worse than what was seen earlier in the week in the U.S. for the same quarter, as Canada enacted restrictions earlier and eased them less aggressively,” Royce Mendes, an economist at Canadian Imperial Bank of Commerce, said in a note to investors. “The good news is that the cautiousness has kept virus cases under control north of the border, suggesting Canada’s economy is in a position to outperform that of the US in Q3.”

Output was up in almost all sub-sectors in May, with double-digit monthly gains by retailers that coincided with the reopening of many stores across the country. Construction, too, recorded a strong rebound, with activity up 18 per cent in the sector.

Oil and gas, and entertainment-related industries continued to shrink.