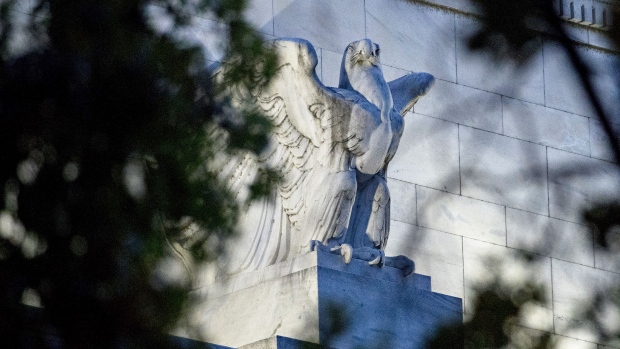 (Bloomberg) -- President Donald Trump is unhappy that the U.S. Federal Reserve under the chairman he chose, Jerome Powell, is raising interest rates. There’s not much Trump can do about it. The central bank is intentionally insulated from day-to-day U.S. politics, with officials’ terms lasting as long as 14 years. The president appoints members to the Board of Governors, including the Fed chairman, but can fire them only “for cause,” and the Senate must sign off on replacements. So there’s not much a displeased president can do. "I’m not even a little bit happy with my selection of Jay," Trump said of Powell in a Nov. 27 interview with the Washington Post. "Not even a little bit. And I’m not blaming anybody, but I’m just telling you I think that the Fed is way off-base with what they’re doing.” Bloomberg News reported on Dec. 22 that Trump had even discussed firing Powell, according to four people familiar with the matter.

Here’s what America’s leader can and can’t do about America’s central bank.

The Federal Reserve Act says governors may be “removed for cause by the President.” Since the chairman is also a governor, that presumably extends to him or her, but the rules around firing the leader are legally ambiguous, as Peter Conti-Brown of the University of Pennsylvania notes in his book on Fed independence. The act doesn’t specify what “cause” means, and no Fed chief in the modern era has been subject to that provision, though Thomas McCabe was forced to resign after clashing with Harry Truman’s administration. William Miller served for just over a year before President Jimmy Carter moved him to the U.S. Treasury in 1979.

Presidents can and do pick someone else when the term of a sitting chairman ends. Trump himself chose Powell to replace Janet Yellen, whom he inherited from Barack Obama. The president can also appoint governors to the Fed board in Washington, which is an important power: The seven officials vote constantly and make up more than half of the 12-member Federal Open Market Committee.

Interestingly, among Trump’s picks for the board -- Randal Quarles, Richard Clarida, Michelle Bowman, Nellie Liang (yet to be confirmed) and Marvin Goodfriend (whose nomination has stalled) -- none is known as decidedly dovish. Even if Trump had nominated doves, they would have to make it past Republicans in the Senate to win confirmation, and some Senate conservatives back a Fed focused on containing inflation rather than lowering unemployment.

Trump isn’t the first president to take issue with the Fed’s rate hikes. His predecessors met with varying success in influencing policy. In December 1965, Lyndon Johnson summoned Fed Chairman William McChesney Martin to his ranch in Stonewall, Texas, to confront him over Martin’s decision to lift rates. He even issued a statement. Martin didn’t cave. Not long after, President Richard Nixon demanded Chairman Arthur Burns goose the economy with low rates ahead of the 1972 election. When Burns didn’t immediately cooperate, the White House planted a false story in the press that Burns was seeking a big pay raise, according to a book by Nixon speechwriter William Safire. Eventually, Burns relented.

As former Fed Chair Paul Volcker recounts in his memoir, written with Bloomberg’s Christine Harper, he met in 1984 with President Ronald Reagan and Chief of Staff James Baker and was told: “The president is ordering you not to raise interest rates before the election.” (He hadn’t been planning on doing so.) More recently, George H.W. Bush’s White House pushed Alan Greenspan behind the scenes on rates and openly called on the Fed to lower its benchmark in June 1992. Greenspan did cut rates 13 times over 1991-92 but slowed the pace of reductions in the latter year, to the White House’s annoyance. Since President Bill Clinton’s tenure, executives have avoided talking about Fed policy, at least publicly. Trump isn’t sticking to that script.

Trump has previously said that while he is “not thrilled” about rate increases, “I’m letting them do what they feel is best.” Still, the president can’t disallow rate decisions: he has no sign-off authority on Fed policy, similar to the autonomy central banks are afforded throughout the developed world.

The FOMC sets policy as it sees fit -- decisions require no lawmaker approval. The Fed’s regional voters are very insulated from politics: they’re selected by their districts, and only the Fed Board has veto power over their appointments. Even the Fed’s budget isn’t appropriated by Congress, though an inspector general does keep an eye on the institution.

Still, threats to that independence have flared up -- particularly because of the Fed’s bailouts of institutions during the financial crisis -- and the central bank defends its ground tooth-and-nail. Lawmakers for example have in the past called for congressional audits of the Fed’s monetary policy. Fed officials say that would risk politicizing rate-setting, worsening boom-and-bust swings.

--With assistance from Christopher Condon and Laurence Arnold.