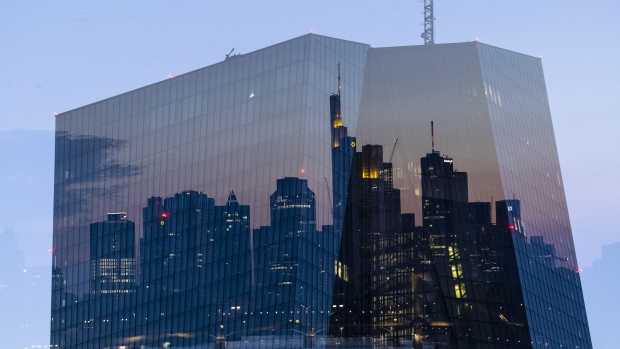 An image of the European Central Bank (ECB) headquarters overlays the skyscraper skyline of the financial district in Frankfurt, Germany, July 1, 2019. Multiple exposures were combined in camera to produce this image. Bloomberg/Alex Kraus

There’s a multitrillion-dollar black hole growing at the heart of the world’s financial markets. Negative-yielding debt — bonds worth less, not more, if held to maturity — is spreading to more corners of the bond universe, destroying potential returns for investors and turning the system as we know it on its head. Now that it looks like sub-zero bonds are here to stay, there’s even more hand-wringing about the effects for mom-and-pop savers, pensioners, investors, buyout firms and governments.

1. Why invest in a bond that will lose you money?

Typically, bonds are the safest assets on the market, so many investors seek them out at times of heightened market stress, say a U.S.-China trade war or tensions in the Persian Gulf. A bond can have a modestly positive coupon when issued by a government, institution or company, but once it starts trading, high demand by investors can push its price up — and therefore its yield down — to such an extent that buyers no longer receive any payment. Some funds track government bond indexes, meaning they must buy the bonds regardless of the yield. And some investors can still make positive returns on these bonds when adjusted for currency swings.

2. How much is being bought?

Negative-yielding debt topped US$13 trillion in June, having doubled since December, and now makes up around 25 per cent of global debt. In Germany, 85 per cent of the government bond market is under water. That means investors effectively pay the German government 0.2  per cent for the privilege of buying its benchmark bonds; the government keeps two euros for every 1,000 euros borrowed over a period of 10 years. The U.S. is one of the few outliers, with none of its US$16 trillion debt pile yielding less than zero, but across the world, strategists are warning that the problem may get worse.

3. Why is this reason for worry?

Negative rates are at odds with basic principles of the global finance system. “One important law of financial logic — if you lend money for longer, you should see a higher return — has been broken,” wrote Marcus Ashworth, a Bloomberg Opinion columnist covering European markets. “The time value of money has essentially disappeared.” (Has it ever: The so-called century bonds issued by Austria two years ago, which mature in 2117 and initially offered a 2.1-per-cent return, now yield about 1.2 per cent.) All this can push investors into riskier bets in the hunt for returns, raising the chances of bubbles in financial markets and real estate.

4. Who benefits from negative rates?

Governments, for one. The incentive to borrow money is never greater than when you are being paid to do so. Germany, for example, is being subsidized to issue debt over the next 20 years, though that does not necessarily mean it will boost spending. Companies that issue bonds also reap the benefits of record-low borrowing costs. So do private-equity firms, which typically use leverage to acquire companies and see greater opportunities when (and where) capital is cheap. Homeowners with variable-rate mortgages also have reason to celebrate.

Pension funds and insurers, traditionally big investors in government bonds, are in a particular predicament: Their liabilities grow steadily as clients age, but often they are required not to take on big risks. Banks see their margins squeezed. They’re earning next to nothing from lending but still need to offer depositors a rate above zero to keep their business. In Germany, the ECB has come under political pressure for hurting the returns of savers. Central banks could run into the problem of hitting the so-called “reversal rate” — the point at which low borrowing costs start to harm rather than help the economy, should banks start to restrict loans. That could deepen any slowdown.

Several of Europe’s central banks, otherwise unable to spur growth in the aftermath of the 2008-09 financial crisis, cut interest rates below zero in 2014. Japan soon followed. The idea was to spur lending by charging financial institutions, rather than rewarding them, for parking money that otherwise could be put to use in the real economy. Since 2016, the ECB’s benchmark rate has been -0.4 per cent, meaning banks lose four euros to store 1,000 euros there. The sub-zero rates were supposed to be temporary but have endured. Traders are betting that the ECB will push its deposit rate ever more negative this year, driving record levels of bond yields below zero.

7. Why have negative rates lasted so long?

More than a decade on from the credit crisis, inflation is still scarce, with wages increasing only modestly despite large drops in unemployment. The ECB, for example, isn’t expected to get to its close-to-two-per-cent inflation target over the next decade, according to a market-derived measure. And the yield difference between U.S. three-month bills and 10-year Treasuries is inverted, an indication that an economic contraction may be coming. Aside from the U.S. Federal Reserve, few central banks that slashed interest rates during the credit crunch have managed to raise rates, meaning that during the next downturn they are likely to head further into negative territory.

8. Where’s all this heading?

In Europe, there are fears that the continent is following the path of Japan’s so-called lost decade, where policy makers struggled to revive anemic growth and inflation. Central banks have been keen to iterate that they still have tools in their locker to combat any slowdown, including rate cuts and more quantitative easing. For markets, waning volatility is bad for trading. Geopolitical tensions over trade, and Britain’s exit of the European Union will keep driving investors into the safest assets, meaning demand will remain high for negative-yielding debt. But the push to find juicier returns with riskier bets raises the prospect of further fund failures or a new crisis.