The chairman of CannTrust Holdings Inc. (TRST.TO) said he remains confident in the company's leadership after the cannabis producer was found to be non-compliant with certain Health Canada regulations, pushing its shares to their lowest level in almost two years.

Eric Paul, founder and chairman of the Vaughan, Ont.-based company, told BNN Bloomberg he isn't planning to call for the resignation of CannTrust's senior management, including chief executive officer Peter Aceto, after an inspection by Health Canada identified several unauthorized activities by the pot producer, such as producing thousands of kilograms of cannabis in unlicensed rooms before it had obtained the necessary approvals from the federal regulator.

"People are out there calling for someone's head," Paul said. "You know that's a typical reaction to these kinds of things but that's not a fair or appropriate thing to do."

The value of that amount of unsold cannabis on the wholesale market is estimated to be close to $70 million, according to one industry consultant.

Health Canada said in a statement late Monday it needs to complete its investigation before determining what enforcement action it would take against CannTrust. It could potentially revoke the company’s cannabis production licence or fine the company up to $1 million.

Falling offside with the regulator sent CannTrust shares into a tailspin Monday, plunging almost 23 per cent for their lowest close since Oct. 30, 2017 at $5.00 per share. The company's stock extended losses in early trading Tuesday, falling to an all-time low.

"We believe that [Monday's] announcement materially impacts the credibility of management as well as investor confidence in the stock, which will take time to rebuild," said Eight Capital analyst Graeme Kreindler in a note to clients.

Chairman Eric Paul said he can't explain how unlicensed cannabis was grown without the company's management knowledge. He said it was "pretty flawed logic" if an employee decided to grow the cannabis to avoid industry-wide supply constraints at the onset of legalization last October.

The company has retained third-party consultants to conduct a root cause analysis to determine the source of how the unlicensed pot was grown, Paul added.

"As the chairman, I still attend most of the weekly management meetings and nothing like this ever surfaced," he said. "It was quite a shock when I found out about it." 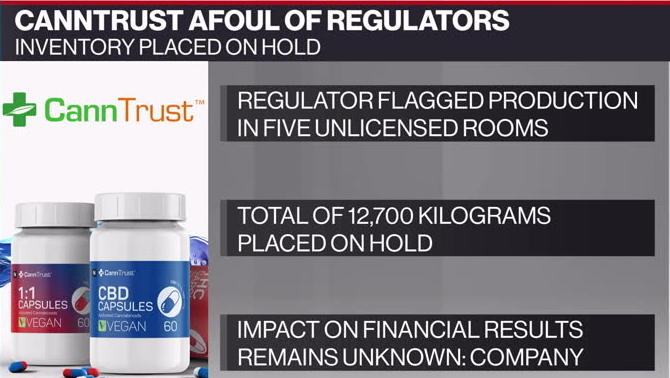 Paul admitted, however, he is concerned with the prospect of losing the company’s production licence to grow cannabis for the legal and medical market, hoping that Health Canada would fine the company or decide that the pot currently quarantined will be destroyed.

"I would hope [Health Canada] will realize that this wasn't something that we were doing, you know, directing at the senior levels of the company and appreciate that we've taken all the corrective action that we can," Paul said.

CannTrust has until July 18 to respond to Health Canada's inspection report. After that, the federal regulator will review the company's response, complete its testing of the quarantined cannabis and determine whether to conduct any enforcement action.

"I think Health Canada has to look at themselves in the mirror and say, ‘Okay, did these guys do it out of desperation or just sheer stupidity,’" Paul said. "We've always come out clean on every inspection and I'm hoping they'll see that this is not intentional on our part, or at least not by the leadership of the company and we'll move on."

However, if management is indeed found to be at fault, Paul said he is prepared to make some hard decisions but added "it's premature" to come to that conclusion right now.

"If there are heads that have to roll, they will roll," Paul said.