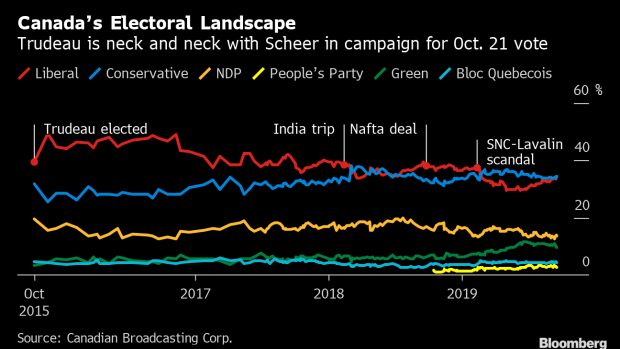 (Bloomberg) -- Justin Trudeau’s remarkable ability to overcome scandal and blunder in his four years as Canadian prime minister faces its most onerous test just weeks before an election.

A series of pictures and a video of Trudeau, 47, in black and brownface makeup have surfaced over the past 12 hours -- dating from high school to as recently as 2001 -- in what is a serious blow to his bid to secure a second mandate in the Oct. 21 federal vote.

While quickly apologizing for the actions, Trudeau conceded he didn’t understand at the time just how racist his behavior was and said he accepts responsibility for them. But the development accentuates many of the biggest doubts Canadians have about their prime minister -- from his privileged upbringing to his authenticity as a beacon of progressive values -- and sabotages his effort to make tolerance and diversity a central theme of this election.

Conflating problems for Trudeau is that the Liberals have regularly sought to flag past incidents of bigotry by the opposition Conservatives, as part of their strategy to paint their chief rivals as rife with prejudice.

“It really has become a problem for them and really, really quickly,” Darrell Bricker, chief executive of Ipsos Public Affairs, said by phone from Toronto. “The whole strategy was basically to demonize the Conservatives by making them look intolerant.”

The most explosive photo of Trudeau, first published late Wednesday by Time Magazine, appeared in the yearbook of West Point Grey Academy, the private school in Vancouver where the leader once taught. The photograph shows Trudeau at an “Arabian Nights” theme party in 2001 wearing an ornate white turban, with his face and hands darkened. The prime minister, who was then 29, poses with four women, his brown arms draped over one of them. A second photo from that event has also emerged.

Trudeau also admitted that he wore make-up in high school for a talent-show rendition of “Day-O,” a Jamaican folk song -- with photos of that event also appearing in Canadian media Wednesday night. A separate video of a third incident of Trudeau in darkened makeup was published Thursday by Global News.

The news came in the second week of the country’s election campaign, with the prime minister already in a tight race with Conservative Leader Andrew Scheer. The latest polling numbers through Wednesday from Nanos Research show the Conservative, at nearly 38%, versus 35% for the Liberals.

The perception of duplicity is one the Conservatives have sought to exploit for a while, with a series of advertisements that attempt to seed questions about the Liberal prime minister’s integrity.

“The Trudeau brownface revelations effectively validate the Conservative ‘Not-as-advertised’ attack ads,” said Nik Nanos, chairman of Nanos Research. “With the Conservatives already on the upswing, this could not have come at worse time in the campaign for the Liberals.”

While this is Trudeau’s most serious challenge, he has a record of overcoming blunders -- testament to how much Canadians still identify with the famously globe-trotting, feminist prime minister.

Trudeau has been reprimanded by the country’s ethics watchdog for a secret vacation in 2016 at the Aga Khan’s private island. There was an embarrassing state visit to India where he was criticized for his over-the-top attire, and for rubbing elbows with Sikh separatists.

The past year has seen Trudeau dogged by accusations that he sought to intervene in a criminal case involving Montreal construction giant SNC-Lavalin Group Inc. -- reigniting criticism of his dominant Liberal Party as overly cozy with big business. Canada’s ethics commissioner last month ruled that Trudeau broke conflict of interest laws by seeking an out-of-court settlement on SNC’s behalf.

And still, until Wednesday, Trudeau was still projected to be the likely winner of the election.

All those previous flubs had “not cut through beyond Canada that much,” Christopher Sands, Washington-based director of the Center for Canadian Studies at Johns Hopkins University, said by phone. “This one has carried across, and resonates.”

--With assistance from Chris Fournier.

To contact the reporters on this story: Theophilos Argitis in Ottawa at targitis@bloomberg.net;Shelly Hagan in New York at shagan9@bloomberg.net

To contact the editors responsible for this story: David Scanlan at dscanlan@bloomberg.net, Stephen Wicary