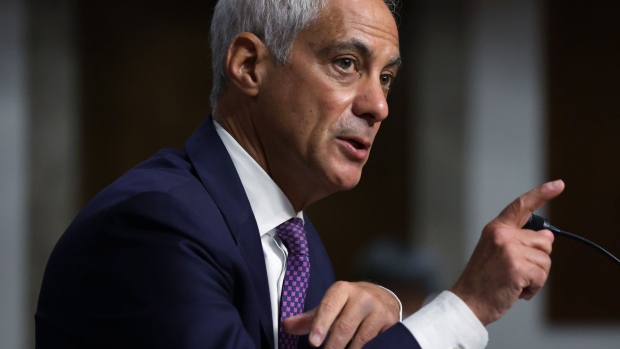 (Bloomberg) -- Rahm Emanuel, nominated as the next U.S. ambassador to Japan, said he will make it a priority to look into the criminal trial of a former Nissan Motor Co. director who was charged with helping Carlos Ghosn understate his compensation.

Greg Kelly, an American citizen, was arrested in Japan on the same day as Ghosn in 2018 on allegations of financial misconduct. Ghosn, who was the Japanese automaker’s chairman and chief of its alliance with Renault SA and Mitsubishi Motors Corp., fled the country in late 2019 by smuggling himself onto a private jet, and now resides in Lebanon.

The trial against Kelly, 65, is in its final stages, with closing arguments scheduled in Tokyo next week. Prosecutors have asked a three-judge panel to sentence the former executive to two years in prison for his alleged role in helping Ghosn hide income. Both Kelly and Ghosn have denied the charges. A verdict is due in March.

“I’ve already started to inquire about this and I want a report on my desk,” Emanuel told a Senate committee at his confirmation hearing Wednesday. “I’m going to be approaching this subject as a former congressman who knows what it means when you have a constituent at heart.”

Emanuel, who served as U.S. President Barack Obama’s chief of staff and was mayor of Chicago, was responding to a question from Bill Hagerty, the Republican Senator from Tennessee, who himself was recently ambassador to Japan. Nissan’s U.S. operations are based in the state and Kelly resided there.

Kelly was one of Nissan’s most senior executives, overseeing human resources, legal affairs and other matters before giving up some of his duties in 2015 while remaining on the board. In trial testimony, Kelly said he sought ways to legally compensate Ghosn after he voluntarily reduced his pay. Japanese authorities said Ghosn hid more than 9 billion yen ($81 million) in remuneration.

Carlos Ghosn’s Downfall at Nissan and the Aftermath: QuickTake

“I know that the Japanese media is here so they can hear it directly,” Emanuel said at the hearing. “This is not just another piece of business to be checked off.”