The railroads may no longer create America’s greatest fortunes, but the tracks still excite analysts after a slew of earnings releases underscored the challenges and potential for freight haulers as the U.S. economy revives.

An index of the largest U.S. freight rail companies just posted its biggest three-day advance since March, outperforming the S&P 500 after Canadian National Railway Co., CSX Corp. and Union Pacific Corp. reported this week. The index is up 9 per cent this year through Thursday’s close compared to a 16 per cent gain for the S&P.

With Canadian Pacific Railway Ltd. and Norfolk Southern Corp. set to report on July 28, many analysts see rail companies as buy opportunities, with the shares largely trailing the broader market this year. The optimism is based at least in part on the view that these key transporters of the nation’s goods and raw materials will overcome the capacity hurdles they’re encountering as the economy reopens. 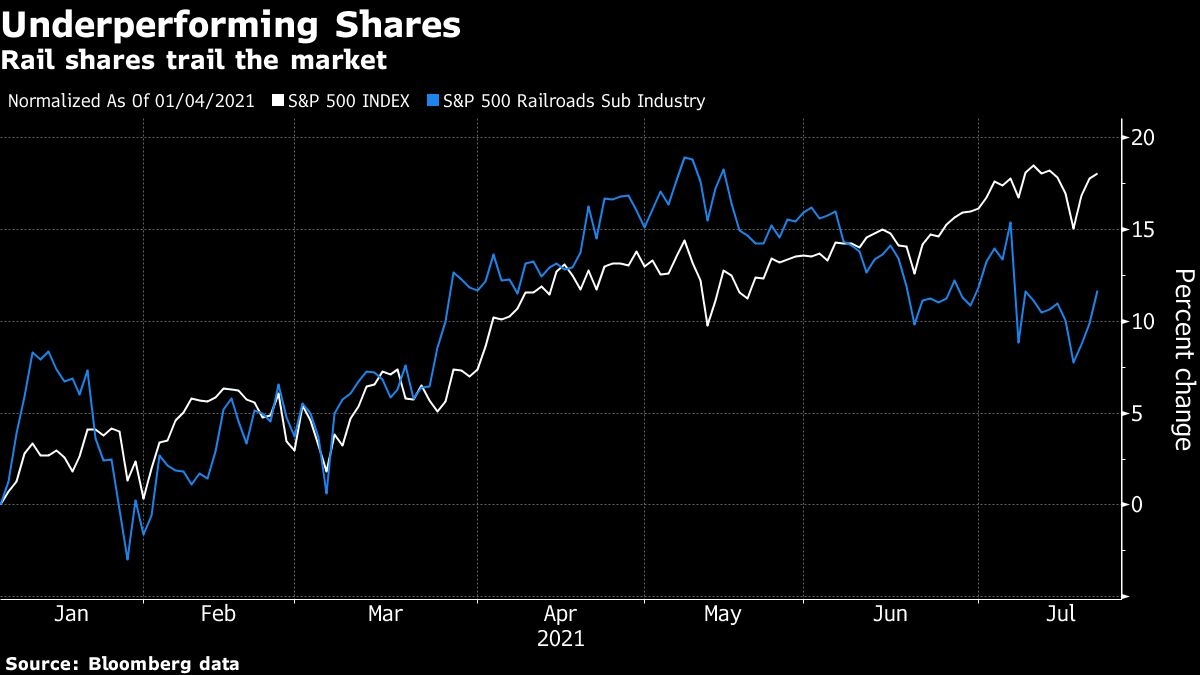 “These guys are among the best companies that I cover,” said Citigroup Inc. analyst Christian Wetherbee, citing improved operating margins since he started covering the railroads in 2005. “That’s an outsized improvement for old-school industrial companies.”

Wetherbee raised his 2021 earnings-per-share estimates for Canadian National, CSX and Union Pacific in the wake of the latest reports. For Union Pacific, he reiterated a buy recommendation, writing in a Thursday note that its revenue and earnings bode well for Norfolk Southern’s report next week.

Year-to-date, Canadian National is the worst performer among the big rails with a 4.5 per cent drop as it pursues a takeover of Kansas City Southern. CSX is up 8 per cent and Union Pacific has gained 5.4 per cent through Thursday’s close.

Rail volumes have nearly rebounded to pre-pandemic levels after dropping 20 per cent in the second quarter of 2020 from the same period a year earlier, according to data compiled by Bloomberg. With supply chains normalizing, company officials say they’re working to meet increasing demand.

“They want the additional capacity and we’re committed to do everything we can to react as quickly as we can to bring on more people, more capacity to serve those customer needs,” CSX Chief Executive Officer James M. Foote said during an earnings call.

Some rail optimists say the tracks could eat into trucking’s massive lead. In 2019, trucking accounted for roughly 72 per cent of U.S. freight shipping, dwarfing the 8 per cent for rail, according to Bloomberg Intelligence data.

Travel by track costs less, and concerns over environmental impacts could earn rail -- with its smaller carbon footprint -- a larger share of the market.

“There’s always going to be some that is much more truck-appropriate,” said Jonathan Chappell, an analyst at Evercore ISI. “But there is a huge opportunity in that middle ground of stuff that could go on rail but just hasn’t historically.”

Overall, the train tracks lack many naysayers. For the six major North American rail companies, sell ratings account for no more than 12 per cent of the grades from analysts covering them, according to Bloomberg data. For each of the three railways that reported this week, the average 12-month price target is at least 11 per cent above current levels.

Even those analysts with hold ratings generally point to inflated share prices that they say already factor in gains for rail.

“Our view is not necessarily negative,” said Ben Nolan, an analyst for Stifel Nicolaus & Co. He has a hold rating on CSX, Canadian Pacific, Union Pacific, and Norfolk Southern. “We do think that they’re in a really good place here, it’s just that that’s already being fully reflected in the share prices.”

One potential hurdle could come from the White House. President Joe Biden signed an executive order this month calling out the rail industry, among others, on the need to increase competition. The move comes as shipping costs have risen, adding to concerns about inflation arising from the economy’s rebound from last year’s lockdowns.

The rule approximates one already in place in Canada, according to Bloomberg Intelligence analyst Lee Klaskow. The order “didn’t have much teeth to it,” he said.

For analysts such as Wetherbee, optimism for rail shares doesn’t even necessarily hinge on the outcome of the debate in Washington over a massive infrastructure spending package.

“It feels like a nice-to-have, but not a necessary-to-have,” he said.