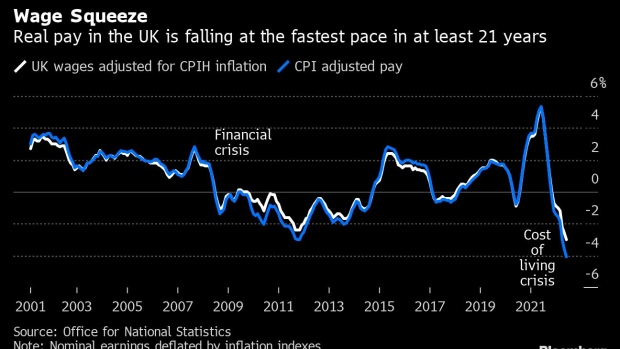 A commuter looks at signs with information about strike action, during the latest round of rail strikes, at the entrance to Waterloo East railway station in London, on Aug. 18. Photographer: Chris J. Ratcliffe/Bloomberg , Bloomberg

Strikes on Britain’s rail network have frustrated workers across the country this week, but their impact is not as disruptive as it once was.

The prevalence of remote working, triggered by Covid-19, has significantly reduced the economic damage from widespread walkouts on public transport, according to the Centre for Economics and Business Research.

The London-based think tank said the UK economy will endure a £65.3 million ($77.1 million) hit from strikes taking place between Aug. 18 and 20. The industrial action spans 14 train companies as well as the London Underground in a dispute over pay, jobs and working conditions.

However, the CEBR said that the knock to economic output -- or gross value added -- would be almost twice as great, at £125.5 million, if home-working was still at 2019 levels.

If no one was able to work from home, the cost would be £181.7 million, it estimated.

The strikes are “an inconvenience” for financial services companies in the City of London but haven’t been too disruptive, according to Steven Fine, chief executive officer of broker Peel Hunt. “We have a proven system and set up for remote working, with clients and other advisers across the City in a similar position.”

Changing working habits are at the center of the standoff between unions, train companies and ministers. The government insists it has to reform the public transport system as fewer people commute to the office, while demand for leisure trips on weekends has grown following the end of Covid restrictions and a trend for holiday-making in the UK.

Unions are resisting changes to working structures and calling for pay rises to keep up with the UK’s soaring rate of inflation, which has already reached 10.1%.

There is a risk “that recurring walkouts will undermine public confidence in the rail network,” according to a spokesperson for the CBI business group.

While many workers are able to work productively from home during the strikes, some parts of the economy are being punished.

“The expected calmer and warmer weather should have seen both domestic and international visitors flocking to the west end” this weekend, said Dee Corsi, chief operating officer of the New West End Company. London’s famous center for shops and bars “will once again be hampered by the latest rail and Tube strikes,” she added.

Footfall close to offices in central London was down 20% on Thursday morning compared to a week earlier, data company Springboard said.