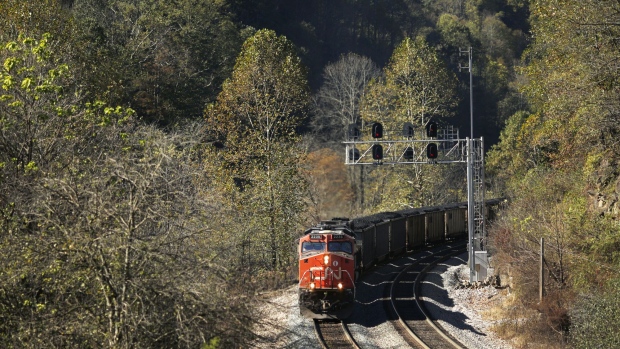 (Bloomberg) -- President Joe Biden and Congress could eventually be asked to resolve a long-running railroad-industry contract dispute if a federal intermediary grants a request by labor unions.

Rail-worker unions plan to urge the National Mediation Board this week to find that the talks, which began in 2020, are at an impasse and to offer arbitration. It’s unclear when there will be a decision by the board, which is hearing from both sides in three days of meetings that end Thursday.

If the board agrees with workers, it could leave it to lawmakers to prevent a work stoppage that would cripple an already battered US supply chain. Unions are betting that as long as Democrats remain in control, Congress can forge a favorable resolution for workers.

There are some 115,000 unionized employees at more than 30 railroads in the US. The Railroad Labor Act limits their ability to strike.

Railroads say the Covid-19 pandemic, which they also blame for logistical challenges that have snarled cargo traffic, delayed negotiations they see as still being in their early stages. Unions argue that rising inflation is eroding paychecks that have been locked at prepandemic levels and that job cuts and other cost-saving steps have exhausted the labor force.

Read more: Wall Street’s favorite way to run a railroad is under fire

The parties are too far apart and workers are angry, which will make it difficult for union leaders to win approval for any negotiated agreement, said Dennis Pierce, national president of the Brotherhood of Locomotive Engineers and Trainmen. Along with higher pay and better health benefits, unions want work rules that get locomotive crews more full days off at home.

“We met 14 times and we’re getting nowhere,” Pierce said in a telephone interview. “And it wasn’t until two years into the round that they finally decided they would make a proposal on wages.”

On the other side, railroad companies are pushing to go to one person in locomotive cabs from two. Executives say they would prefer not to have the government intervene.

“A volunteer agreement is much more appealing than something that would come through a presidential emergency board and Congress,” said Beth Whited, Union Pacific Corp.’s chief of sustainability and strategy. “Both sides lose their voice as you walk through that process.”

The board could decide the talks should remain in mediation, which is the railroads’ position. The path that could land the talks on Capitol Hill starts if the mediators offer arbitration.

If one side rejects arbitration -- which Pierce said unions would -- then Biden has the discretion to form a Presidential Emergency Board after a 30-day cooling-off period. The panel would have 30 days to make recommendations to resolve the dispute.

If the emergency-board report is rejected by either side, the House and the Senate would have to approve legislation to end the dispute, and that could take different forms. Lawmakers have stopped labor-related rail disruptions in the past, including in the 1970s and 1990s.

Failure to pass legislation would pave the way for the union to strike.

The unions see only a small window to start the process so it would fall to the current Congress, Pierce said. If the decision pushes past mid-June, the issue likely wouldn’t be resolved before November’s midterm elections, he said.

Railroad operators would be willing to negotiate on wages and health benefits, where companies have sought higher worker co-pays, Union Pacific’s Whited said. Work rules are complex, but can be set in mediation. The call for a one-person crew could be negotiated separately, she said.

“It could happen quickly, but both sides would have to decide that they want to work on it,” Whited said about reaching a deal. “We really need to give this an opportunity to work because I think it can.”

Unionized rail employees are working under a contract that was frozen in 2019, before inflation hit the highest in more than four decades. On average, they make $130,000 a year including benefits, according to the railroads’ labor talks website.

To ease some of that pressure, railroads offered in April to pay union workers an extra $600 a month that would come out of back pay for raises retroactive to Jan. 1, 2020. The unions rejected the offer, calling it a bargaining ploy.

BNSF, the largest freight railroad by revenue, said in a statement that it is committed to working toward a “swift and fair resolution.” The Fort Worth, Texas-based company said it’s setting aside funds for back pay for delayed salary increases.

Unions are digging in against giving back more on health benefits right after they worked through the pandemic and won’t budge on work rules, Pierce, the union official, said. He said the labor savings would likely be used to increase profits and fund share buybacks and dividends.

“They’ve been pushing these health-care changes from day one and we’ve told them no from day one,” he said. “That, in our opinion, is the definition of being at an impasse, when you keep asking for the same thing and someone tells you no for two and a half years.”