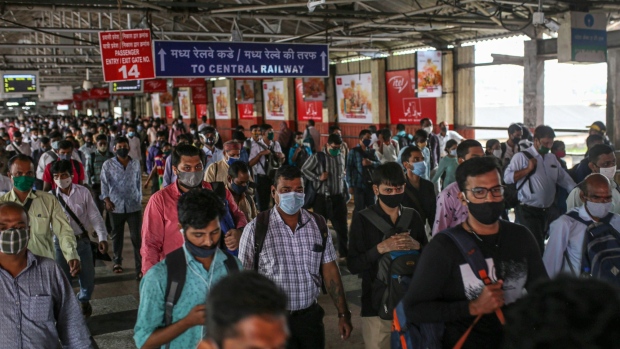 Passengers on a pedestrian bridge at Dadar railway train station in Mumbai, India, on Monday, Aug. 16, 2021. Mumbai has restarted commuter train services for fully vaccinated residents, a move that could tackle traffic jams that are popping up as Covid-19 cases drop off but also one that risks transmitting the virus across India's financial hub. , Bloomberg

Shares of Indian Railway Catering and Tourism Corporation Ltd., a state-run firm with a monopoly on online booking of rail tickets, plunged 25% over Tuesday and Wednesday. The selloff was sparked in part by a downgrade at IIFL Securities Ltd. after the stock had tripled since the start of the year.

People flocked to Twitter to vent their frustration, using imagery of horrible accidents, roller coasters and pop culture including the Netflix hit “Squid Game”. Others laughed at the expense of FOMO traders who seemingly had bought too late.

IRCTC’s stock has surged 13-fold since its market debut in October 2019, helped by the government’s move to open Indian Railways’ routes to private players. Now investors are eying risks including a gradual selldown of the government’s 67% stake and a recovery in air travel as Covid-19 fades.

“The fundamentals are still strong for the counter but the valuations have been overstretched,” said Santosh Meena, head of research at Swastika Investmart Ltd. The stock briefly jumped as much as 7.1% Thursday before paring its gain.

The stock is trading at about 88 times its 12-month forward earnings, down from almost 116 times on Monday, according to data compiled by Bloomberg.