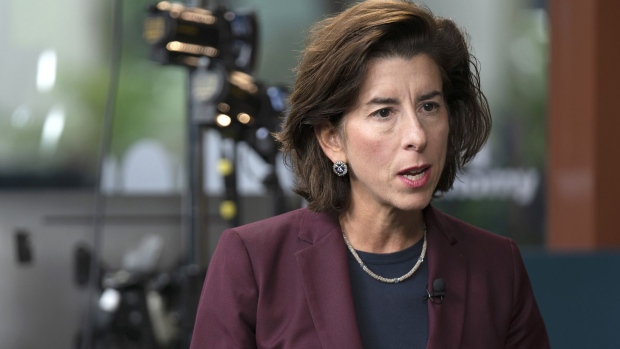 (Bloomberg) -- Commerce Secretary Gina Raimondo on Monday will make the case for more domestic production of semiconductors in a pitch aimed at the administration’s goal to have 50% of U.S. vehicles be electric by the end of the decade.

Raimondo will press Congress to pass legislation that would put about $52 billion toward U.S. chip manufacturing in a speech to the Economic Club of Detroit during a visit to the city that’s the capital of American auto manufacturing.

The Michigan Democrats all strongly support the chips legislation and some have asked for a share of the supply to be set aside specifically for auto production. The state is one of the most important political battlegrounds in the country, and its Democratic governor, Gretchen Whitmer, is up for re-election in 2022.

“Electric vehicles require orders of magnitude more chips than combustion engine cars and more sophisticated chips,” Raimondo said in a briefing with reporters last week. “So if we’re going to help the auto industry move and hit their goals for electric vehicle production, essential for that to happen is to have the kind of chips and the volume of chips that are necessary.”

The worldwide auto industry has been suffering production disruptions for nearly a year from a global chip shortage, leading to furloughs for American autoworkers. The administration has acknowledged there’s no quick fix.

Raimondo is leading the Biden administration’s response to the shortage. Her department recently asked companies in the semiconductor supply chains for information to detect bottlenecks and potential hoarding of supplies.

The submissions of more than 150 companies from around the world exceeded Raimondo’s expectations, she said. Her team is still evaluating the responses and plans to share a high-level summary of the findings in coming weeks.

The Biden administration is working with allies to map out supply chain problems and investments in new capacity to ensure early detection of supply problems and preventing future shortages.