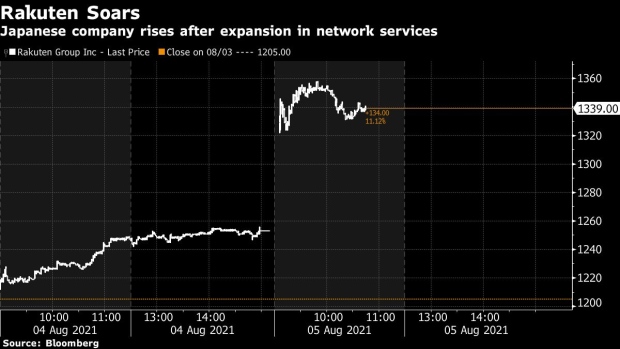 A Rakuten Mobile Inc. employee works inside the company's store in Tokyo, Japan, on Thursday, Jan. 23, 2020. Rakuten, a Japanese e-commerce giant, said it has installed over 3,000 outdoor base stations at a pace that has exceeded its original schedule in preparation for the official launch of its mobile network in April. , Bloomberg

(Bloomberg) -- Rakuten Group Inc., the Japanese e-commerce giant that launched a mobile service last year, gained the most in over three months after the company said it won its first contract to export its network-building knowhow overseas.

The shares climbed as much as 8.4% to 1,358 yen in Tokyo on Thursday, the biggest intra-day gain since April 22. Rakuten said it signed a 10-year contract to build, run and maintain a fully-virtualized network for Germany’s 1&1 AG. While the company declined to disclose the value of the deal, Nikkei newspaper reported its worth at over 250 billion yen ($2.3 billion).

The Japanese e-commerce giant shook up the domestic wireless market when it launched its network in April 2020, taking on incumbents KDDI Corp., SoftBank Corp. and NTT Docomo Inc. with cheaper and more flexible service offerings. Rakuten said it is the first mobile carrier in the world to build a service using next-generation radio access network architecture that allows for more extensive use of the cloud and frees the operator from hardware-vendor lock-in.

“We are defnitely a front-runner in this field and I think we have a couple of years in headstart advantage,” Rakuten Chief Executive Officer Hiroshi Mikitani said in an interview with Bloomberg Television. “Addressable market will be somewhere between $100 billion to $150 billion in two to three years.

Rakuten also announced that it created Rakuten Symphony, a unit that will offer network solutions to mobile carriers, and said it has already held discussions with dozens of clients around the world. Separately, the Japanese company said it acquired the remaining shares of Altiostar Networks Inc., making the U.S.-based telecom software developer a fully-owned subsidiary.