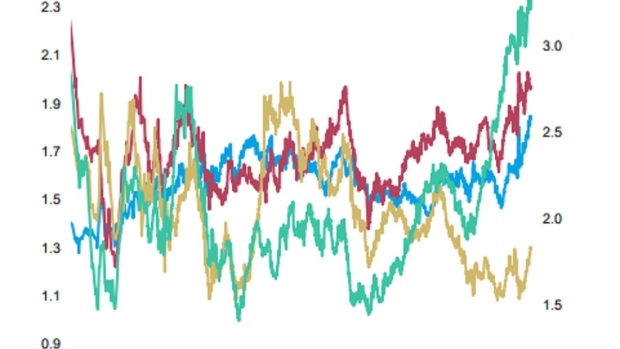 (Bloomberg) -- The relentless rally in American equities is emboldening hedge funds at a time their own clients are getting worried.

Professional managers that make both bullish and bearish equity bets last month pushed their long positions on stocks up above their short ones by a ratio of almost 1.9-to-1, the highest reading in more than a decade, according to data compiled by Morgan Stanley’s prime brokerage unit. The S&P 500 rose 5.5% during the period, its best July since 2010, and has rallied in the first three days of August.

Meanwhile, the firm’s survey of hedge fund investors showed roughly three quarters of the respondents expect the S&P 500 to finish the year lower than 3,300. The benchmark closed on Wednesday at 3,327.77, about 26 times annual earnings.

People are choosing sides in a year like no other, when rebounding shares have pushed valuations to two-decade highs even as a pandemic rages. While investors in the Morgan Stanley survey cited everything from the health crisis to a weak economy and November’s presidential election as the top market risks, the people paid to ride the wave are afraid of missing out.

“Investors felt hedge funds performed well in 2Q, despite missing part of the market rally,” the firm wrote in the note to clients last week. About “90% of investors felt HF performance was in-line or better than expectations.”

Equity-focused hedge funds returned 13% from April to June, according to data from Hedge Funds Research. While that trailed the S&P 500’s 20% gain, it’s the industry’s best quarterly performance since 1999.

To be sure, long-short managers typically pick individual stocks, rather than making broad market wagers. Their latest bullish stance was partly driven by short covering, a process that reduces bearish bets, according to Morgan Stanley. Net leverage, a measure of industry risk appetite that takes into account long versus short positions, reached a two-year high last month.

As things stood at the end of July, managers tracked by Morgan Stanley maintained their fondness for growth companies such as technology, stocks viewed as beneficiaries during the pandemic-induced lock down because their products enable social distancing. At the same time, they continued to shun airlines while scooping up retailers.

To Adam Blitz, chief investment officer at Evanston Capital Management, the appeal of investing with these hedge funds comes from their ability to pick the right stocks, especially when the proliferation of passive investing creates value dislocations.

“The opportunity in L/S equity is excellent right now, in large part because there’s such a fast rate of change in certain sectors, like technology and health-care, and such uncertainty and questions of survivability in other sectors such as real estate, leisure, brick-and-mortar,” Blitz said. “Even if the market is lower, you can still have some big winners emerge.”