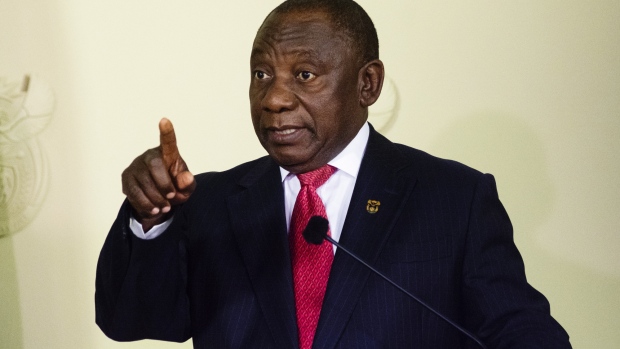 (Bloomberg) -- South African President Cyril Ramaphosa is hamstrung by politics and the economy is suffering the consequences.

His narrow win to become leader of the ruling African National Congress in December 2017 has left him dependent on the left -- the unions and the South African Communist Party that are ANC allies and helped him become party president. Now the same labor movement that he worked to strengthen almost four decades ago as an anti-apartheid activist stand in the way of reforms needed to revive the economy.

“It’s difficult to please market forces while he has got these allies,” said Ntsikelelo Breakfast, a politics lecturer at the University of Stellenbosch. “There are people holding him back.”

Left-leaning senior members of the ANC say they back him against supporters of ousted President Jacob Zuma and party secretary-general, Ace Magashule, because they can see the damage that’s been done to the economy. Magashule is the highest-ranking party official allied to Zuma and has publicly contradicted the president on policy.

But Ramaphosa’s powerful labor backers are opposed to the job cuts needed to help rescue indebted state power utility, Eskom Holdings SOC Ltd., and to trim a bloated government wage bill. Similarly, selling loss-making state-owned companies is off the table, forcing the government to add to debt to bail them out.

Business leaders, criticized by the media for remaining quiet despite damaging policies during Zuma’s presidency, have begun to speak out. The country’s biggest business lobby told its members last week that the government has no political will, no sense of urgency and, unless it changes its ways, will be forced to seek relief from the International Monetary Fund.

The government has already had to commit 128 billion rand ($8.3 billion) to keep Eskom running and has tough choices to make around its 440 billion rand of debt. The national airline, broadcaster and arms company all need money. Those pressures at a time when economic growth can’t reach 1% may cost the nation its last remaining investment grade rating at Moody’s Investors Service, sparking billions of dollars in outflows.

While Ramaphosa and his closest allies know what needs to be done to revive the economy, from restructuring Eskom to easing onerous work visa rules for skilled immigrants, they haven’t reached an agreement with the labor unions, said a senior business leader who has discussed the issues with Ramaphosa. The person declined to be identified as the talks were private.

Saftu was formed in 2017 from unions that broke away from Cosatu and is opposed to the ANC. That schism makes it less likely Cosatu will compromise on job cuts because it fears losing its dominance, the business leader said.

“The wrestling match over the ANC tiller is now essentially between a hard-left faction and aggressive racial nationalist faction all under the supervision of a captain who cannot break the deadlock or inspire a third way,” the Johannesburg-based Centre for Risk Analysis said in a report it gives to clients. Ramaphosa “believes, fatally in our view, that maintaining unity among the crew is a priority,” it said.

Ramaphosa is battling on several fronts.

Magashule, one of the top party leaders, is pushing for the nationalization of the central bank and quantitative easing to pay off debt. While Ramaphosa received a boost from Zuma’s dwindling influence in the ANC, the secretary-general’s opposition and legal battles have narrowed the room to act.

The president and his public enterprises minister, Pravin Gordhan, are challenging cases filed against them by the state anti-graft ombudsman, viewed by critics as being aligned with Zuma and Magashule. Busisiwe Mkhwebane has denied the allegation.

The 86-member ANC National Executive Committee is seen by analysts as evenly split between supporters of Ramaphosa and Magashule. While the cabinet is weighted toward his allies, Ramaphosa secured support from the left by appointing former union leaders to the trade, labor and minerals and energy ministries.

Ramaphosa’s instinct is to build consensus, and he would be hesitant to be the leader who presided over the breakup of the 107-year-old ANC. The irreconcilable differences between the two factions in the party may make that difficult.

“Time is not on his side, he is damned if he does and damned if he doesn’t,” said Claude Baissac, the head of Eunomix Business & Economics Ltd., a Johannesburg-based risk advisory firm. “Someone needs to make some bold decisions here.”

To contact the editors responsible for this story: John McCorry at jmccorry@bloomberg.net, Gordon Bell, Karl Maier