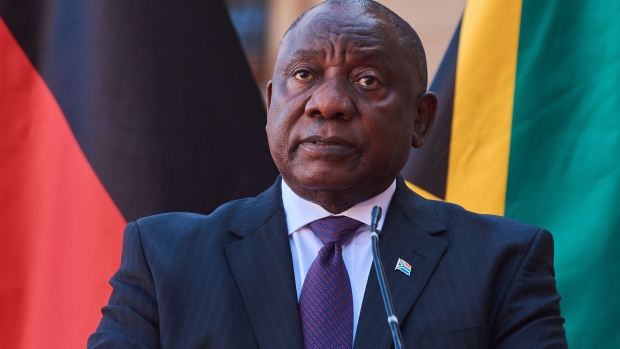 Cyril Ramaphosa, South Africa's president, during a news conference with Olaf Scholz, Germany's chancellor, at the Union Buildings in Pretoria, South Africa, on Tuesday, May 24, 2022. Scholz is visiting South Africa as part of his first African tour since becoming chancellor. , Bloomberg

South African President Cyril Ramaphosa mounted a defense of his corruption-fighting record and promised consequences for the architects of a massive scheme to defraud the state days after the head of a judicial inquiry found that he had stood by while the looting happened.

In a column carried by the Sunday Times, Ramaphosa detailed his efforts to rebuild the country’s National Prosecuting Authority and the South African Revenue Service after their evisceration during the nine-years of rule by his predecessor Jacob Zuma. During that time Ramaphosa has said that at least 500 billion rand ($32 billion) was stolen from the state.

“We have undertaken serious measures to to rebuild key institutions that were weakened by state capture,” Ramaphosa wrote, using a local term for state graft. “The country’s law enforcement agencies were systematically debilitated to limit their ability to act against those involved in corruption.”

Ramaphosa’s comments come days after Chief Justice Raymond Zondo handed in the last volume of findings from an almost four-year judicial inquiry into corruption. In his findings on evidence that Ramaphosa gave, Zondo said it was “opaque” as to what he knew as Zuma’s deputy and said he failed to lead by not speaking up against corruption.

Ramaphosa didn’t address that criticism but insisted that action will now be taken. He has four months to outline what measures will be  adopted following the publication of the more than 5,000-page report, which recommended the investigation of dozens of cabinet ministers, government officials and businessmen.