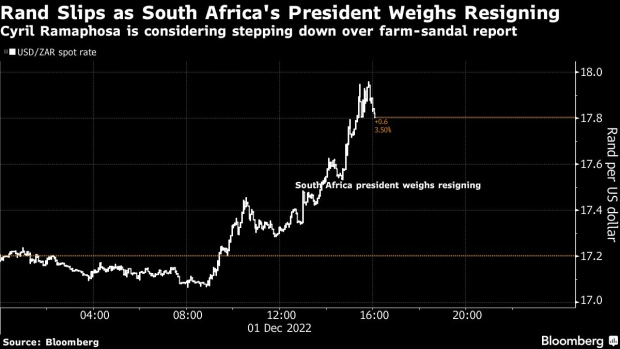 (Bloomberg) -- A scandal engulfing Cyril Ramaphosa is threatening to take down more than just the South African president. Hanging in the balance are the fate of his party and his government’s reform agenda that was to have kick-started a stagnating economy.

On Wednesday, an advisory panel established by parliament found grounds for lawmakers to consider impeaching Ramaphosa, an icon of the anti-apartheid struggle, over his alleged failure to properly report a robbery at his game farm -- during which he says $580,000 hidden in a sofa were stolen -- and potential violations of the constitution. Several senior officials within his African National Congress have joined opposition parties in calling for him to resign, something Ramaphosa is weighing, according to people familiar with the matter who asked not to be identified as they’re not authorized to speak to the media.

The president is still consulting on how to respond to the report and will act in the nation’s best interests, his spokesman Vincent Magwenya told reporters in Pretoria on Thursday, adding that an announcement was “imminent.”

“All options are on the table,” Magwenya said. “He is not panicking, that I can assure you.”

If Ramaphosa does go, there’s no obvious long-term successor within the ANC, and it’s unclear whether whoever takes over will champion the reforms he set in motion. While criticized for their slow pace, they’ve nevertheless included a crackdown on corruption, the liberalization of the broken state power sector and a drive to get significant private investment in infrastructure for the first time. Even if Ramaphosa opts to fight for his political survival, the distractions might mean little will get done.

“Ramaphosa will either resign or he is going to be pushed off the cliff,” said Prince Mashele, an author and political analyst. His successor isn’t going to move boldly when it comes to reforms and “will have to be careful to the point of doing nothing,” he said.

That risk has been recognized by investors: The rand tumbled toward its worst decline in six years and the government’s borrowing costs surged the most since 2015.

Prior to the release of the panel’s report, Ramaphosa was seen as a shoo-in to win a second term as ANC leader at a party conference due to begin Dec. 16, having secured the vast majority of nominations for the post.

A strong mandate and coterie of other party leaders more aligned with his own views would have allowed him to accelerate reforms. Analysts had been expecting a reshuffle of his cabinet after the party vote, with the firing of incompetent ministers and those opposed to his plans to transition the economy to green energy and open it up to more private investment.

Since taking office,in 2018, Ramaphosa has effectively ended the monopoly of Eskom Holdings SOC Ltd., the state electricity utility that’s subjected South Africans to intermittent power cuts since 2008, freeing companies to build their own power plants and supply the grid. The spectrum needed to modernize South Africa’s telecommunications sector was sold after more than a decade of delays. Several former leaders of state companies, politicians and party officials have been charged with corruption

Those moves, however, haven’t alleviated some more immediate concerns.

Unemployment, at 32.9%, is the third highest among 82 countries tracked by Bloomberg; most state companies are struggling to repay their debts and dysfunctional municipalities have left communities with potholed streets and without water and power.

Ramaphosa came to power after the ANC forced Jacob Zuma to step down following an almost nine-year tenure during which the government estimates more than 500 billion rand ($29 billion) was stolen from state coffers. He campaigned on an anti-corruption ticket, and his success as a businessman who had made several hundred million dollars raised hopes he would put in place sound economic policies.

The president won favor with South Africans tired of years of scandal and a deteriorating economy. But his party didn’t fully benefit from his popularity and its share of the vote fell to below 50% for the first time ever in last year’s municipal elections. A recent survey by Ipsos forecast that it would win just 41% of the vote in the general elections in 2024, meaning that it would be forced into a coalition to retain power. The party’s prospects may now weaken further.

“The ANC is finished,” Mashele said. “The people of South Africa only trusted Ramaphosa among that whole ANC lot.”

Ramaphosa does have options. He can take the panel’s findings on legal review, and opposition calls for an early election are unlikely to meet favor with the ANC, which can quash those demands with its parliamentary majority, said Lawson Naidoo, executive secretary of the Council For the Advancement of the South African Constitution.

The ANC’s National Executive Committee is due to meet on Thursday night, which will give Ramaphosa’s detractors an opportunity to call for his resignation. Parliament is due to sit on Dec. 6 to decide whether to adopt the advisory panel’s report, and if they do, a panel of legislators will be set up to conduct another inquiry.

“I don’t know if they are going to come through for Cyril,” said Ralph Mathekga, an independent political analyst.

If Ramaphosa does go, it would be an ignominious end to a storied political career. The Soweto-born lawyer created what was once the country’s most powerful labor union and in the late 1980s led the biggest ever mining strike, bringing mining giant Anglo American Ltd. to the negotiating table. In 1990 he held the microphone while Nelson Mandela, South Africa’s most famous son, spoke to his people in Cape Town after his release from 27 years in prison.

Still, the current crisis may not be all bad, some say. It may just hasten an era of instability of coalition governments and contested ideas -- a necessary transition for a country led so far by its liberators, but now peopled largely by young men and women with little, if any, experience of apartheid who are more preoccupied with finding a job and hoping that the lights turn on when they flick a switch.

“It looks like a crisis for the country, but I believe it’s part of the political re-grounding of South Africa, saying the ANC may not be the answer,” Mathekga said. “I see this is as a necessary self destruction. We are observing the ANC gradually disintegrating.”

--With assistance from Colleen Goko, S'thembile Cele and Robert Brand.

(Updates with comment from president’s spokesman from third paragraph.)