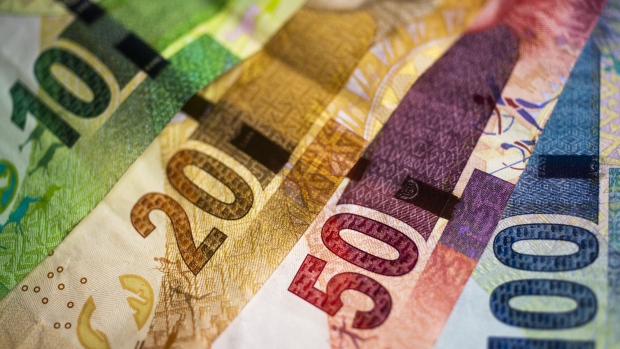 South African rand banknotes sit in this arranged photograph in Pretoria, South Africa, on Wednesday, Aug. 14, 2019. The rand ended a tumultuous week on a positive note, gaining against the dollar for a second day and heading for its first weekly advance in four as technical indicators suggested recent declines are overdone. Photographer: Waldo Swiegers/Bloomberg , Bloomberg

While offering little that is new on the planned restructuring of Eskom Holdings SOC Ltd., Ramaphosa announced sweeping measures Thursday to address power shortages and reduce dependence on the debt-stricken utility. He warned that the nation’s debt trajectory is unsustainable and said Finance Minister Tito Mboweni will announce spending cuts in the budget on Feb. 26, with the government and labor unions in talks to reduce the state wage bill.

The rand climbed 0.5% to 14.8806 per dollar by 10:09 a.m. in Johannesburg, heading for its best weekly performance this year. Yields on 10-year sovereign dollar bonds dropped two basis points to 4.66%, the lowest level on a closing basis since Sept. 6.

“The speech touched on a broad range of domestic concerns, ranging from electricity supply, state-owned enterprises, youth unemployment, climate change and access to education,” said Siobhan Redford, a Johannesburg-based analyst at FirstRand Bank Ltd. “It is fair to say the president hit all the right notes in his annual song to the people of the South Africa, but many will want to see action before buying into the promises.”

To contact the reporter on this story: Robert Brand in Cape Town at rbrand9@bloomberg.net

To contact the editors responsible for this story: Alex Nicholson at anicholson6@bloomberg.net, Paul Richardson, Hilton Shone