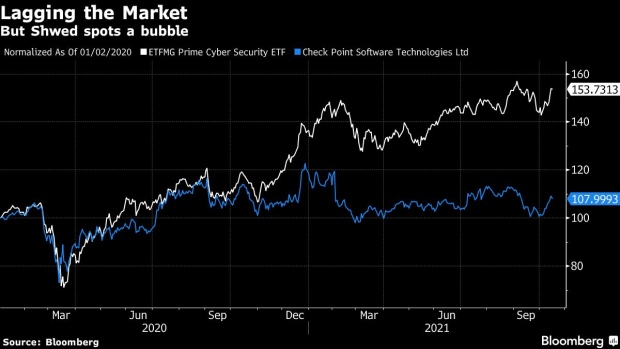 (Bloomberg) -- A cybersecurity veteran whose company sits on a $4 billion cash pile says he won’t rush to acquire new startups, citing concerns of a bubble even as analysts warn that his firm faces an uncertain future.

Gil Shwed, chief executive officer of Check Point Software Technologies Ltd., said that the pace of growth in cybersecurity meant new firms were expanding at breakneck pace. High-profile hacks and a global shift to remote working helped startups raise $17.7 billion in venture capital funding in 2021 as of October 11 -- a 74% jump over all of 2020, according to PitchBook.

Most of those startups do not have clear paths to profit and are valued at levels that “take 10 or 20 years of perfect execution to reach,” Shwed said in an interview in Tel Aviv.

Check Point’s peers, including Palo Alto Networks Inc. and Fortinet Inc., have been more aggressively entering growing sectors such as cloud security, despite the jump in equity prices. Meanwhile, the Israeli firm’s sales growth and its stock have been treading water.

Shwed, who co-founded Check Point 28 years ago, rejects the growth-at-any-cost approach. “It’s very hard to justify” spending hundreds of millions of dollars on companies that would marginally contribute to the firm’s $2.1 billion of annual revenue, he said.

The Israeli billionaire’s view on the market separates him from Wall Street, Silicon Valley and even Israeli startups. Tel Aviv’s tech sector has garnered 36% of global cybersecurity investment this year, according to Pitchbook.

“In my 25 years of venture capital investing, I’ve never seen as much momentum and budget growth for cybersecurity spending at large enterprise, mid-market and even smaller companies globally,” said Glenn Solomon, managing partner at GGV Capital, which has invested in competitors such as the Israeli firm Orca. “We don’t see this trend waning and we’re investing heavily in the next set of innovative cybersecurity startups in Israel and elsewhere.”

The $20 billion network security market is expanding faster than 10% a year, according to Mandeep Singh, a senior analyst at Bloomberg intelligence. With so many new competitors vying for business, it’s likely that Check Point’s market share is slipping, he said.

If Check Point -- which sells firewalls as well as email, mobile and cloud security products -- doesn’t invest more in new innovations, it will “run the risk of becoming obsolete 10 years down the line,” said Singh. By way of comparison, Palo Alto spent more than $1.6 billion in four deals over the last 18 months, roughly five times as much as Check Point doled out in the same period.

Check Point’s advantage over most cybersecurity companies, Shwed is keen to point out, is that it makes money -- $843 million in 2020. “If you look at the traditional business model of technology, it should be a very profitable business,” he said.

The firm sits on a cash pile of $4 billion, and -- despite Shwed’s general caution over acquisitions -- just spent $270 million to buy Avanan, an Israeli cloud email security startup.

Check Point has also invested about $100 million in building out its cloud security business, and has ambitions to grow a subscription-based model over the coming years.

Analysts are watching to see if the company can accelerate recent growth in subscriptions, which would lock in revenue while it builds out other arms of the business.

“It’s up to us to show to the market that the business model is changing and it generates growth,” Shwed said.