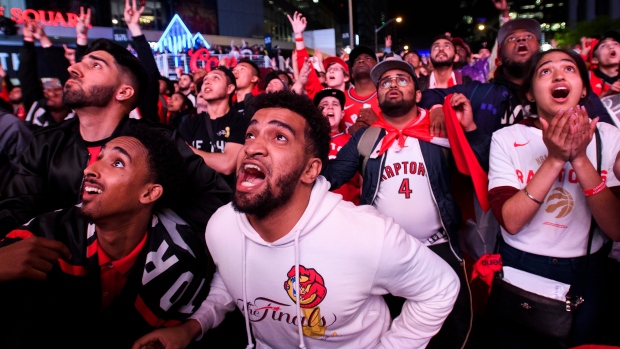 Fans reacts in the finals minute of the game in Jurassic Park as the Toronto Raptors defeat the Golden State Warriors during Game 6 NBA Finals to win the NBA Championship, in Toronto on Thursday, June 13, 2019. , THE CANADIAN PRESS/Nathan Denette

One day after the St. Louis Blues won the first Stanley Cup in the team’s 52-year history, and set a National Hockey League sales record in the aftermath, the Toronto Raptors won their first National Basketball Association title. Sales of Raptors championship apparel and memorabilia on NBA.com broke the record for the day following a title, topping LeBron James’s 2016 victory with his hometown Cleveland Cavaliers.

It’s a lucky break for Fanatics, which runs the official online stores of the NBA, the NHL and the Blues. Though there have been better two-day sales runs in company history, the world’s largest seller of licensed sports apparel has never sold this much from two different champions -- both first-timers -- in back-to-back days.

As much as it pains me to see the @Raptors win the NBA title ... at least @Fanatics is having a 2nd straight monster day of champ gear sales!!!! 😂😂😂 This will be the 2nd best NBA championship ever for merchandise (only behind @cavs in 2016) pic.twitter.com/co6sFquMtm

The Raptors joined the NBA as an expansion team in 1995 and had never made the NBA Finals until this year. They’ve also been the league’s only Canadian team since the Vancouver Grizzlies moved to Memphis, Tennessee, in 2001, which means the Raptors have fans throughout the country.

About 60% of Raptors sales have come from Canada, according to Fanatics, which declined to provide specific sales figures. More than 70% of sales for both the Raptors and the Blues have come via mobile devices.

The Raptors beat the Golden State Warriors 114-110 in Game 6 on Thursday night in Oakland, California, to win the NBA title. The Warriors, who had won three of the last four championships, likely would have produced a smaller sales total.