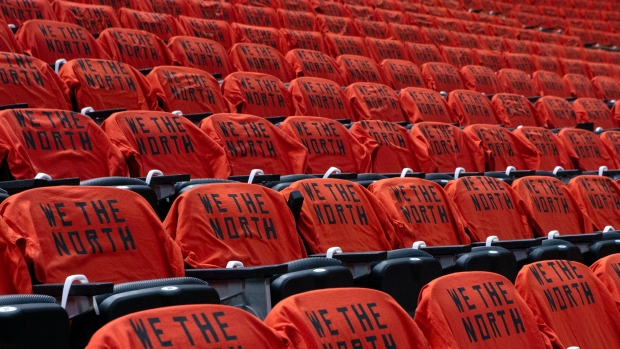 FILE - In this June 10, 2019, file photo, T-shirts rest on seats at Scotiabank Arena before Game 5 of the NBA Finals between the Golden State Warriors and Toronto Raptors in Toronto. , Chris Young/The Canadian Press via AP

TORONTO - The Toronto Raptors say they will start their season playing home games in Tampa, Fla., next month after being unable to come to an agreement with various levels of government to play at Scotiabank Arena during the COVID-19 pandemic.

The Raptors had hoped to start the 2020-21 campaign at home despite rising numbers of COVID-19 cases at home and in the United States.

But the spikes in cases, the Canadian government's restrictions around cross-border travel and the mandatory 14-day quarantine for people entering Canada proved too much for the country's only NBA team.

Raptors president Masai Ujiri said the current public health situation facing Canadians, combined with the team's urgent need to find a place to play, led to the decision to announce Tampa as a temporary home on Friday.

The Raptors join the Toronto Blue Jays, Toronto FC, the Montreal Impact and the Vancouver Whitecaps, who played most of their respective seasons south of the border.