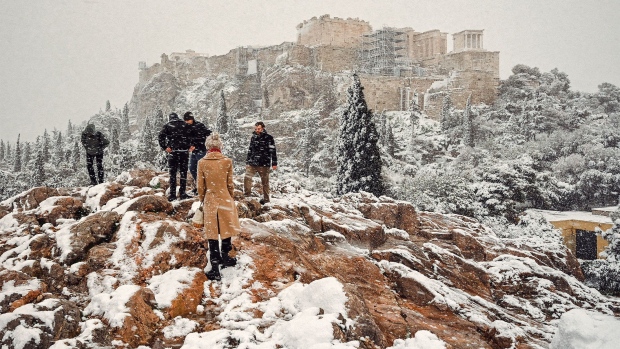 ATHENS, GREECE - JANUARY 24: People take photos of The Parthenon temple atop the Acropolis hill archaeological site during heavy snowfall on January 24, 2022 in Athens, Greece. Heavy snowfall in the Greek capital of Athens has forced authorities to close off sections of highways and many streets. (Photo by Milos Bicanski/Getty Images) , Photographer: Milos Bicanski/Getty Images

(Bloomberg) -- A heavy snowstorm that blanketed Greece triggered power outages in the capital Athens and its suburbs and prompted the nation’s government to order businesses and public services shut down.

“At any cost we must avoid any loss of human life,” he said, in an appeal to Greeks to stay put.

The heavy snow snarled traffic and stranded drivers, while flights were canceled at Athens International Airport.