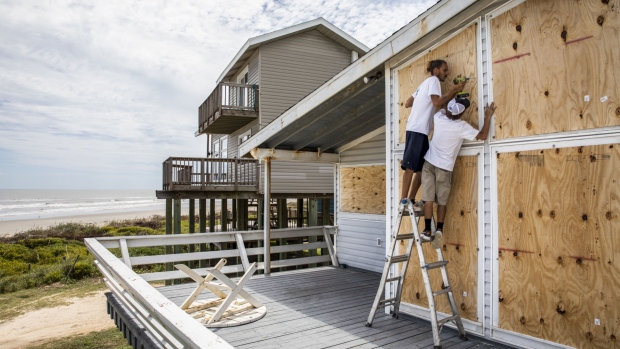 Workers board up a beach-front house ahead of Hurricane Laura in Galveston, Texas, U.S., on Tuesday, Aug. 25, 2020. , Scott Dalton/Bloomberg

Hurricane Laura is poised to become a life-threatening Category 4 storm before coming ashore along the Texas-Louisiana coast this week, potentially inflicting as much as US$18 billion in damage on the region and keeping some of America’s largest oil refineries shut for months.

Laura’s winds were forecast to peak at 130 miles (209 kilometers) per hour over the Gulf of Mexico, but may weaken slightly before hitting the coast on Thursday, according to the National Hurricane Center. The storm has already disrupted offshore oil and natural gas production, shut a third of the Gulf Coast’s refining capacity, halted exports and prompted mandatory evacuations. It’s set to be the first major system to hit the Gulf Coast since Michael in 2018.

“Laura has become a formidable hurricane,” the NHC said on its website. A “life-threatening storm surge with large and dangerous waves is expected to produce potentially catastrophic damage from San Luis Pass, Texas, to the mouth of the Mississippi River.”

Even when it was forecast to become no more powerful than Category 3, Laura was predicted to cause anywhere between US$6 billion and US$18 billion in losses, according to Chuck Watson, a disaster modeler with Enki Research. About 10 per cent to 12 per cent of U.S. refining capacity could be shut for more than six months, he said.

“It is going to be a hard hitter, and it is going to cause some devastating impacts,” said Jim Rouiller, lead meteorologist with the Energy Weather Group. “Louisiana is going to have a lot of damage with this storm.”

After Laura rips across the Gulf Coast, it will leave a path of destruction through the Mississippi Valley before turning on the Mid-Atlantic region that just recovered from Hurricane Isaias, Rouiller said. There is a possibility Laura will re-intensify once it makes it to Maryland, New Jersey and possibly New York, he said.

The tropical threat has prompted more than 84 per cent of oil output and nearly 61 per cent of natural gas production in the Gulf of Mexico to be shut, according to the Interior Department’s Bureau of Safety and Environmental Enforcement.

Gulf Coast refineries and petrochemical plants are often located in low-lying areas vulnerable to flooding. In 2017, an Arkema SA chemical plant about 25 miles east of Houston had a fire and explosion after it was flooded by Hurricane Harvey. Last September, Exxon shut its Beaumont refinery in Texas because of flooding from Tropical Storm Imelda.

Laura could push sea levels as high as 15 feet (4.6 meters) in the Sabine Pass area and along parts of the Texas coast where the Henry Hub is located, the hurricane center said at 5 a.m. New York time. Storm surge kills nearly half of all people who die in hurricanes.

This surge could penetrate as much as 30 miles inland from the immediate coastline in southwestern Louisiana and far southeastern Texas, Jack Beven, a senior hurricane specialist at the center, wrote in his forecast. “Actions to protect life and property should be rushed to completion this evening, as water levels will begin to rise on Wednesday,” he wrote.

Some of the largest U.S. refineries are winding down in advance of Laura, shutting in nearly 2.9 million barrels a day of capacity. That’s about 30 per cent of U.S. Gulf Coast refining capacity, according to Lipow Oil Associates.

Energy platforms in the Gulf of Mexico that account for as much as 17 per cent of America’s oil production and about three per cent of gas output are designed to withstand storms of this magnitude.

The energy industry is “very well prepared for this type of storm,” U.S. Energy Secretary Dan Brouillette said in an interview with Bloomberg TV. President Donald Trump has ordered him to make the Strategic Petroleum Reserve available for such situations, he said.

The city of Port Arthur, Texas, will order some residents to flee the storm starting Tuesday, according to the city’s website. Jefferson County in Texas put in place a mandatory evacuation order for all except essential personnel, it said in a statement. Houston-area government officials urged resident of the city’s eastern suburbs to evacuate.

Laura will be a record seventh system to hit the U.S. by August, and more are coming, Rouiller said.

Western sugarcane in Louisiana between Lake Charles and Lafayette will be the most at risk, said Drew Lerner, president of World Weather Inc. in Overland Park, Kansas. For cotton crops, some parts of the western Mississippi Delta area, and central and interior parts of Arkansas also could be impacted, he said.

The governors of Texas, Louisiana and Mississippi have all declared emergencies. Laura killed at least nine people in Haiti and the Dominican Republic, the Associated Press reported.