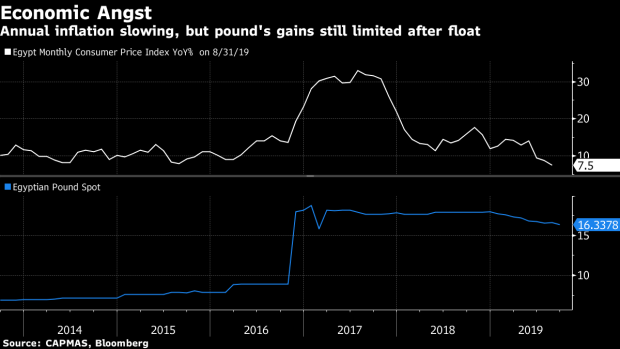 (Bloomberg) -- It took an unlikely trigger to get Egyptians back on the streets of Cairo to protest against President Abdel-Fattah El-Sisi’s government.

More than eight years after Egypt’s uprising against then-leader Hosni Mubarak, and reeling under worsening living standards, hundreds of people defied a ban on protests to demonstrate in several major cities late Friday. The apparent inspiration: a series of online videos by a fledgling actor and ex-government contractor alleging corruption all the way at the top.

While small, the very existence of the protests was a stark reminder of simmering disquiet in the North African nation of 100 million that’s seen two uprisings since 2011. The response of El-Sisi, an ally of U.S. President Donald Trump and who typically cracks down on dissent, could be crucial for the Arab world’s most populous nation. He has dismissed the allegations as baseless.

Any more instability could mean further turmoil for Egypt’s economy and its reputation among emerging-market investors. The benchmark EGX30 index for stocks declined 5.3% on Sunday, the most in a session since June 2016.

“It’s not so much the size of the demonstrations, it’s that they are happening at all,” said Mohammad Darwazah, a director at Medley Global Advisers. “It’s significant because this regime has a zero-tolerance policy for dissent. But when you shut down all institutions that can provide a release valve, frustration will inevitably grow.”

The challenge for El-Sisi, who was elected after overthrowing and jailing an Islamist president amid mass demonstrations in 2013, comes as protesters in nearby Algeria remain in the streets demanding regime change long after the ouster of veteran leader Abdelaziz Bouteflika, and in wake of the April overthrow of Omar Al-Bashir by Sudan’s military.

Authorities used tear gas to break up Friday’s demonstrations and there were several arrests, according to rights groups. The protests took many by surprise, including activists who took part in the 2011 revolt, as well as state-run media, though there’s little indication whether the action will snowball into further unrest.

In a video from self-imposed exile in Spain, Mohamed Ali, who’s appeared in a few Egyptian films and says he owned a construction firm with links to the military, hailed the protests he’d been urging.

“Didn’t Sisi see what happened yesterday?” he said in a dispatch posted Saturday on social media, the latest in a series that has gone viral. He speculated that the Egyptian leader “must be confused now and doesn’t know what to do.”

Egypt has long been seen as key to stability in the broader Middle East. The 2011 downfall of Mubarak rippled across the region, bringing turmoil in its wake. After the army’s overthrow of an elected president from the Muslim Brotherhood, Gulf Arab nations poured in money to assist a government that had routed one of the region’s major forces of political Islam.

A 2016 devaluation of the pound was a precursor to the sweeping economic program that helped seal a $12 billion International Monetary Fund loan. Egypt has since became an emerging markets darling for bond investors chasing high yields.

But there was a price. Egyptians increasingly complained about soaring living costs, with the poverty rate climbing to 32% in 2018 from 28% in 2015. Meanwhile, the government slashed fuel and electricity subsidies and looked for more tax revenue to plug the budget gap. Real incomes, adjusted for inflation, fell compared to 2015 levels.

“Egyptians were willing to tolerate austerity at first” but this might change “when that suffering is perceived to be unequal,” Tarek Radwan, a strategic outreach director at the Tahrir Institute for Middle East Policy, said on Twitter. “Hence the spark created by Mohamed Ali’s accusations of corruption.”

El-Sisi has repeatedly called for patience and said he appreciates the economic stress Egyptians are under. At the same time, he’s warned there’s no room for anyone to try undercut the “new country” he’s trying to build.

In his videos, Ali addresses issues such as shortfalls in education and healthy care. But in the process, he breaks many taboos linked to Egyptian politics. In his latest, he described the protests that followed a widely watched soccer match on Friday as a “revolution.”

Punctuating almost every sentence with insults directed at El-Sisi, he alleges the waste of billions of pounds in building palaces, hotels and other projects, either for his family or benefiting his backers. Similar claims were among the drivers of the protests that saw Mubarak booted from office after nearly 30 years in power.

El-Sisi has addressed the claims directly, saying such buildings are for the nation, not for him. He’s accused people of trying to reverse the gains made by Egypt since he took power.

“For the time being, investors and the international community are likely to wait and see what happens this week and next Friday, in terms of protests,” said H.A. Hellyer, senior associate fellow at the Royal United Services Institute and the Carnegie Endowment. “Few will be assuming radical change, but will still keep a close eye for the next few days.”

To contact the reporter on this story: Claudia Maedler in Dubai at cmaedler@bloomberg.net

To contact the editor responsible for this story: Rosalind Mathieson at rmathieson3@bloomberg.net