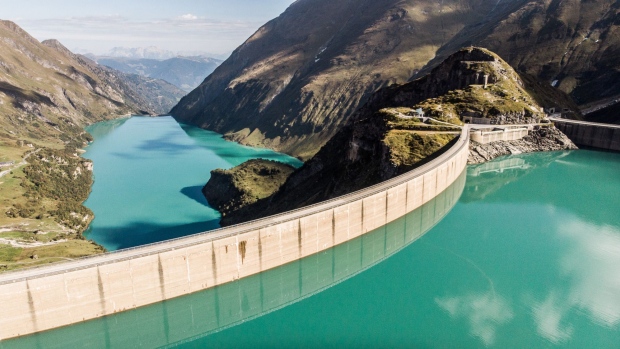 The Wasserfallboden lake and the Mooserboden lake stand in this aerial photograph taken at the Verbund AG Moosersperre Dam in Kaprun, Austria, on Thursday, Sept. 13, 2018. Pumped-hydro plants like Kaprun, with 830 megawatts of capacity, can store enough power to cover almost 100,000 households for more than a week. , Bloomberg

(Bloomberg) -- A rarely-used financial product that makes it easier to monitor the performance of sustainable projects has been endorsed as a reliable way to avoid greenwashing in the $4 trillion ESG debt market.

The idea combines green debt, where proceeds are broadly used to fund environmental projects, with sustainability-linked bonds (SLBs), where the amount of interest an issuer pays depends on whether it meets specific sustainability goals. The Institute for Energy Economics and Financial Analysis, which advocates for a faster transition from fossil fuels, said on Thursday that a hybrid model -- so-called green SLBs -- can ease investors’ greenwashing concerns and become best practice for sustainable debt.

So far only a handful of green SLBs have found their way into the market, including one issued by Austrian electricity provider Verbund AG, and others by Japan’s Takamatsu Construction Group Co. and China’s Yunnan Provincial Energy. The expectation is that more issuers will experiment with the structure, allowing investors to fund environmentally-friendly projects while giving companies an incentive to improve their sustainability performance.

Currently, “there is very little in the green bond market to tether companies and governments to their promises [so] you could end up supporting an inherently non-green issuer,” said Karim Henide, a fixed-income portfolio manager at Record Currency Management, who has researched the hybrid structure. By comparison, green SLBs “are a panacea for the market, setting a gold standard for green debt architecture.”

The new style of bonds is poised to become more popular, but also faces hurdles. Strong demand for ordinary green debt, sales of which are proving more resilient than normal bonds, means that issuers aren’t rushing to incorporate tougher structures. It also costs more to track the use of a bond’s proceeds and a company’s progress against sustainability goals.

Green SLBs “are a natural progression of the market,” said Amrita Ahluwalia, a managing associate in Linklaters’ capital markets team. Arthur Krebbers, head of corporate climate and ESG capital markets at NatWest Markets Plc, added: “However, this is likely to remain a distinct niche as it entails significantly more upfront and ongoing time and resources to maintain.”

The need for novel instruments comes amid a boom in green debt issuance and a regulatory crackdown on firms overstating their sustainability credentials. Some bond issuers now are pondering the merits of such borrowing and European lawmakers have been prompted to design a standard for green bonds, the largest segment of the market. At the same time, there are fears that the targets associated with sustainability-linked debt -- known as key performance indicators (KPIs) -- lack ambition, leading market stalwarts to question their integrity.

Combining the features of both instruments could sway doubters. Investors can be assured SLBs won’t directly finance controversial activities as the proceeds would be ring-fenced. And green bond issuers would be held accountable through forward-looking commitments, easing the concern that much of the market is refinancing past projects.

The structure might prove particularly useful if issuers want to incorporate social targets in green bond deals. For example, the UK’s sovereign green bonds won plaudits for tracking both the environmental and social benefits of the projects they finance. A hybrid structure could go a step further and contractually link a bond’s interest rate to the achievement of such social benefits, such as job creation, amid the transition to a low-carbon economy.

“You’ll probably see this as a new emerging area,” said Jason Taylor, the managing director for sustainability advisory and finance at National Bank of Canada, of the debt format. “As the world moves more into a just transition environment, where many countries have added the word ‘just’ to their Nationally Determined Contributions, adding social KPIs to a green bond aligns very well with that.”