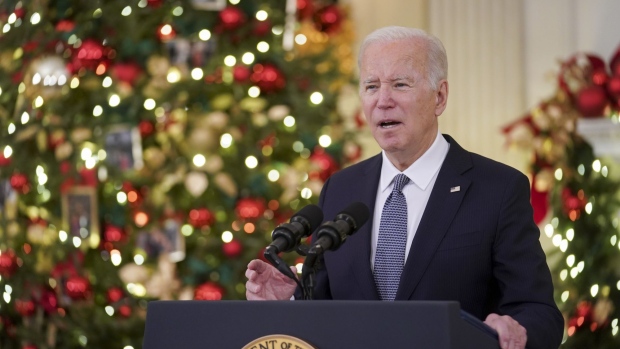 (Bloomberg) -- President Joe Biden is experiencing nasal congestion and a “frog” in his throat, and has tested negative for Covid-19 and other viral illnesses, his doctor said Friday.

Biden’s voice has sounded raspy in public appearances late this week, drawing questions from reporters about the 79-year-old’s health. The White House released an evaluation from the president’s physician, Kevin O’Connor, detailing his minor illness.

After a speech on the latest jobs report Friday, Biden told reporters he was “OK” and was ill with “just a cold.” He suggested he’d gotten it from his “1 ½-year-old grandson who likes to kiss his pop.”

Biden has been tested for Covid-19 three times this week, as well as for other coronaviruses, influenza and streptococcus, O’Connor said. Treatment will include common over-the-counter medications, the doctor added.

O’Connor concluded after Biden’s Nov. 19 physical that the president is “healthy.” The doctor said at the time that Biden was suffering from a “perceptibly stiffer and less fluid” gait following a series of injuries and was experiencing a more frequent need to clear his throat or cough while speaking.

O’Connor said after the exam that a series of tests led him and other doctors to conclude that the throat-clearing issue is the result of gastroesophageal reflux, and recommended the president continue taking Pepcid as an acid blocker.