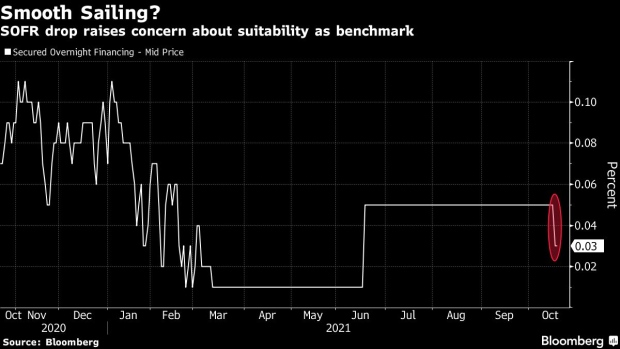 (Bloomberg) -- The drop in the Secured Overnight Financing Rate, the Federal Reserve’s preferred replacement for Libor, is raising concern about potential ructions in the final stretch of the transition.

With a little more than two months until market participants are prohibited from entering into new agreements tied to the London interbank offered rate, SOFR slipped 2 basis points this week to 0.03%. This rate volatility will likely be a focus for bankers at the next gathering of the Alternative Reference Rates Committee, the Fed-backed body that’s overseeing the transition away from Libor in the U.S., on Tuesday when it hosts a symposium.

“Entering into this crucial period for Libor transition where banks and loan officers will now determine which new benchmark mark best serves their and their customers’ needs, the last thing SOFR needed was another reason for institutions to not want to use it,” BMO strategists Dan Krieter and Daniel Belton wrote in a note to clients.

While the financial system has assumed that SOFR would be the primary benchmark rate in the post-Libor world, this latest stumble may give some end-users pause as they determine their preferred Libor alternative. Regulators have been urging market participants not to wait for Dec. 31 and some have said progress needs to accelerate.

SOFR has already been criticized for its lack of a credit-sensitive component and forward-looking rates -- though the ARRC formally endorsed CME Group’s term structure in July -- and spurred some investors to look at other options. While enthusiasm for non-SOFR alternatives has faded in recent months, there still remains significant interest for other potential replacements, from Ameribor and the Bloomberg Short Term Bank Yield Index, and ICE’s Bank Yield Index. (The Bloomberg Short Term Bank Yield Index, known as BSBY, is administered by Bloomberg Index Services Limited, a subsidiary of Bloomberg LP, the parent of Bloomberg News.)

SOFR’s drop -- the first since March -- has been attributed to increased demand for specific Treasuries in the market or repurchase agreements as short positions need to be financed, as well as the monthly influx of cash from the government sponsored enterprises entering the funding markets this week. Some strategists expect the rate to return to 0.05% as early as next when the GSE cash exits and the Treasury’s two-, five- and seven-year auctions settle, which will add more collateral to the repo market.

Even if the decline in SOFR proves to be temporary, there’s still questions about whether it’s a suitable replacement, especially from those investing in floating-rate notes tied to the benchmark. Should SOFR remain low or even drop further, investors may demand more compensation for so-called floaters as the securities are repriced lower, according to Bank of America.

“SOFR is a complicated and hard to predict index,” strategists Mark Cabana and Katie Craig wrote in a note to clients. “To understand variations in SOFR one must understand detailed intricacies of the overnight UST GC repo market which are complex even for veteran money market participants.”