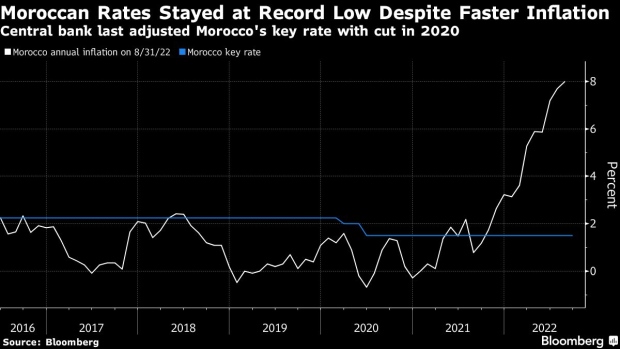 (Bloomberg) -- Morocco’s first interest-rate hike in 14 years is likely approaching, as concern over the highest inflation in decades threatens a drive for cheap borrowing that was meant to revive the economy.

A growing probability of a policy change doesn’t mean a rise is a done deal when Bank Al-Maghrib makes its latest quarterly decision. Two of the kingdom’s major financial institutions are at odds over whether the regulator will touch its benchmark rate, which has been at an all-time low of 1.5% since 2020.

The outcome of Tuesday’s meeting is shaping up as the bank’s most unpredictable decision in several years.

At question is what effect a hike would have on annual inflation that reached 8% in August -- and whether Moroccan authorities will risk the possible trade-off in growth for the $115 billion economy.

Elevated inflation could make it more entrenched and lead to “second-round effects” by pushing up wages, according to Abdelaaziz Ait Ali, head of research at the Policy Center for the New South.

A quarter-point rate hike by the central bank is needed “to send a message it’s sticking to the main letter of its mandate, which is maintaining price stability,” he said.

The North African nation has been an outlier in a world that’s raising rates in response to the biggest inflation shocks in years. It last adjusted rates in the first half of 2020, trimming a cumulative 75 basis points in a bid to blunt the impact of the pandemic on an economy that also relies on tourism from Europe.

Some question how effective that was, however, with credit growth remaining weak in 2022.

This time, the outlook is already turning less upbeat. The central bank projects economic expansion will slow to just 1% this year, from 7% in 2021, after drought hit the crucial agriculture sector.

A hold is “more than probable” in a bid to maintain financing support for the post-pandemic recovery and give time for mostly imported inflation to ease, analysts at CDG Capital, the investment arm of Morocco’s biggest pension management fund, said in a note last week.

Meanwhile, just over half of 35 of the “most influential investors” in Morocco’s financial markets expect a hike, according to Attijari Global Research, a unit of the country’s biggest lender, which didn’t cite the respondents’ reasons. That figure compared with 37% before the last decision in June.

Central bank Governor Abdellatif Jouahri in June said he expected inflation would fall to 2% next year with a pact with unions on wage increases for low-income workers helping quell accelerating consumer prices.

That hasn’t stopped the speculation. “Is a hike inevitable?” asked a headline in Moroccan business newspaper L’Economiste this week.

Investors in the kingdom’s dirham-denominated treasury bills are already bracing for the likelihood of higher rates ahead, according to Ait Ali.

“The cost of borrowing has been rising lately, especially for short- and medium-term maturities,” he said.