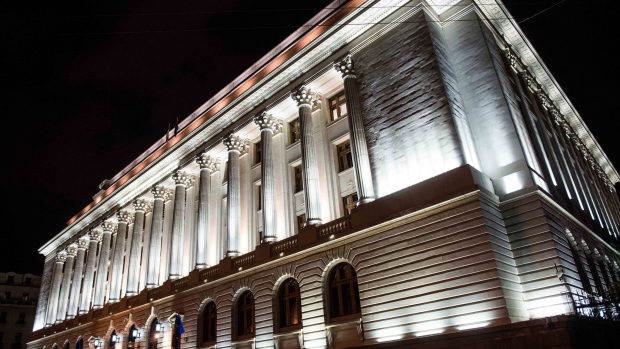 Lights shine on the exterior of the Romanian central bank, the Banca Nationala A Romaniei, as the building is illuminated at night in Bucharest, Romania, on Thursday, June 11, 2015. Battling to retain his three-year premiership, Romania's Prime Minister Victor Ponta denies allegations including money laundering and complicity in tax fraud, leveled in the first Romanian criminal probe to target a sitting head of government. , Bloomberg via Getty Images

(Bloomberg) -- Go inside the global economy with Stephanie Flanders in her new podcast, Stephanomics. Subscribe via Pocket Cast or iTunes.

The Romanian central bank is keeping rate hikes on the table for this year as it expects inflation to overshoot its target.

Governor Mugur Isarescu on Friday didn’t rule out another increase in the benchmark rate, although he said that a tighter control of money market liquidity, potentially using new instruments, is now the main tool to fight surging consumer prices.

“I don’t want to give any forward guidance but I can’t exclude rate hikes this year, nor will I commit to any,” Isarescu told reporters in Bucharest after the bank significantly increased its inflation forecast.

Even as robust economic growth outpaces most other European Union nations and inflation is running at the fastest clip in the bloc, Romanian central bankers have refrained from raising interest rates for a year. Instead, they have turned to managing money-market liquidity to tighten monetary conditions.

The reluctance to lift borrowing costs mirrors the wait-and-see approach adopted by some peers in central and eastern Europe and follows a dovish tilt by major global central banks amid concerns over a global economic slowdown.

By contrast, the Czech central bank has raised rates six times since the start of 2018 to combat inflation driven by robust wage growth.

The Romanian central bank on Friday unveiled its new inflation forecast, which sees consumer prices rising 4.2% this year, compared with the previous estimate of 3%. Price growth is expected to return to the target band of 1.5% to 3.5% at the end of 2020.

“We’re trying to keep things under control, we’re serious people, whose mandates are nearing the end in October, but we won’t choke the country’s economic growth for the sake of one figure,” Isarescu said. “We have to ensure a balanced monetary policy, regardless of elections.”

To contact the editors responsible for this story: Andrea Dudik at adudik@bloomberg.net, Peter Laca, Flavia Krause-Jackson