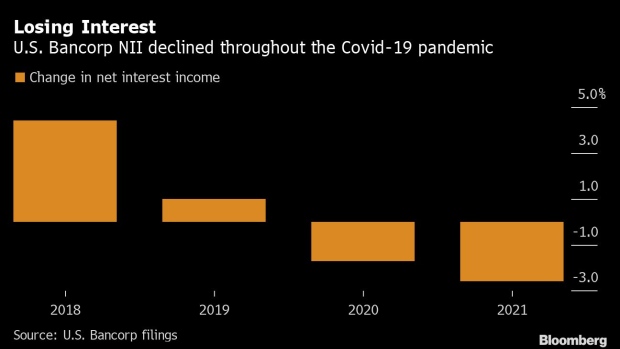 Financial firms are including about three central-bank increases into their guidance for the year, with Charlotte, North Carolina-based Truist Financial Corp. seeing the possibility for as many of four. The hikes are likely to translate into higher net interest income -- the revenue lenders collect from customer loan payments minus what they pay depositors. Traditional lending accounts for a greater share of revenue at regional banks than at the Wall Street giants.

“Regional banks often times are more balance-sheet dependent in terms of their revenue,” U.S. Bancorp Chief Financial Officer Terry Dolan said in an interview after the bank reported fourth-quarter results Wednesday. “A rising-rate environment will help the regional banks maybe more so than those that are capital-markets dependent.”

The Minneapolis-based bank said it expects net interest income to increase “at a mid-single-digit pace” this year after dropping 2.6% in 2021.

The expected increases to the federal funds rate loom as the Fed winds down measures it took to prop up the economy during the Covid-19 pandemic, and the U.S. government’s stimulus payments to individuals and businesses fade. Taken together, those factors may herald a return of long-awaited loan growth.

“Main Street banking should be the best that it’s been in over three decades at a time when Wall Street banking is subsiding from record levels last year,” Wells Fargo & Co. analyst Mike Mayo said in a phone interview.

The outlook isn’t without potential pitfalls. For one thing, liquidity in the system and strong overall credit quality have allowed banks to release reserves they’d set aside for a surge in loan defaults that never ended up emerging during the pandemic -- a cushion lenders may not be able to depend upon for much longer. Bank executives said they now expect credit quality to revert to a more typical level in coming months.

And if the Fed raises interest rates too quickly, economic growth could be hurt, also causing pain to lenders eager to see their business and individual customers resume their borrowing, Barclays Plc analyst Jason Goldberg said in a phone interview.

Still, the outlook across the industry appears mostly rosy, especially if the central bank is able to thread the needle.

“You’ve seen a decline in net interest margin since Covid hit in March of 2020,” Truist Chief Financial Officer Daryl Bible said in a phone interview Tuesday. “You’ll start seeing a reversal of that probably in the second quarter.”