BoC doesn't need to be aggressive and risk bringing the economy down: Economist

With the Bank of Canada determined to get inflation under control, an economist at Capital Economics warns that aggressive rate hikes could cause a big drop in home prices and could risk sending the Canadian economy into a recession.

“The Bank of Canada’s recent communications suggest that it will be unfazed by the second consecutive double-digit drop in home sales in May,” wrote Stephen Brown, senior Canada economist at Capital Economics, in a note to clients titled “Bank risks sending housing into a tailspin” on Tuesday.

“This raises the chance of the bank enacting a larger interest rate hike at its meeting in July and leaves us concerned that it will take a more aggressive approach to policy tightening than is ultimately required, driving house prices sharply lower and risking a major recession.”

Recent data shows home sales and prices have cooled meaningfully across the country since the Bank of Canada kicked off its rate hiking campaign.

This month, Canadian central bank officials warned they wouldn’t hesitate to act “more forcefully” to lower inflation and that they see the benchmark rate rising to roughly three per cent.

While Brown admitted a housing slowdown is “arguably exactly what is required” to bring inflation down, he added that “the danger, however, is that the bank will misjudge the impact of its aggressive policy tightening,” since it takes time for the impact of higher rates to fully filter through the housing market.

Brown calculates that an overnight lending rate of 3.5 per cent would result in an average five-year fixed mortgage rate of 4.5 per cent. 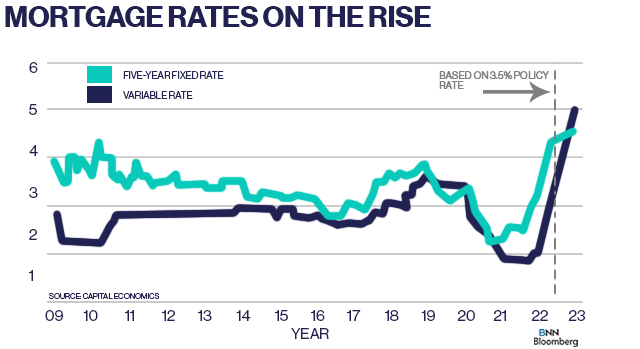 “Even allowing for an acceleration in wage growth this year, an average of those mortgage rates would reduce the maximum house price that a buyer could afford by 23 per cent compared to last year, four times as large an impact as during the prior three tightening cycles,” he said.

In a scenario where a medium-income household committed one third of its pre-tax income to mortgage payments, Brown said they would have a budget of $525,000. The latest data from the Canadian Real Estate Association showed the benchmark price of a home in April was $866,700.

“If the bank raised its policy rate to 3.5 per cent, which is only slightly above the current market implied terminal rate of 3.25 per cent, then the housing market would face the most dramatic hit to affordability since the early 1980s Volcker Shock,” Brown said.

Because of the implications for the housing market, he said he’s not confident the bank will actually raise rates to that level, though he said there’s a risk policymakers do in fact act more aggressively than he’s anticipating.

“If so, we would also forecast a steeper decline in house prices than our current assumption of a 10 per cent correction and, rather than GDP growth slowing only to below its potential next year as we currently expect, there would be a real risk of recession,” he said.