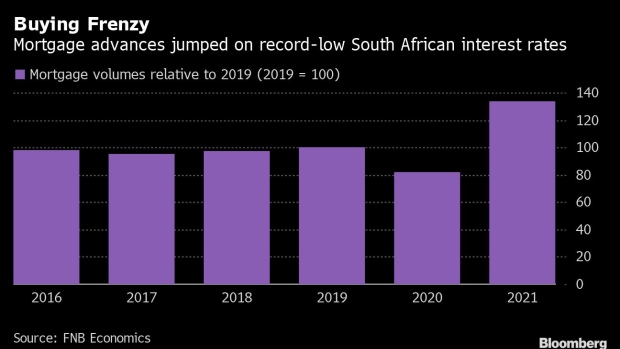 A residential building under construction next to an apartment block in the Rosebank district of Johannesburg, South Africa, on Thursday, Nov. 12, 2020. Jobs were at the center of a post-virus reconstruction and recovery plan presented by President Cyril Ramaphosa last month, with the government committing 100 billion rand ($6.37 billion) to create public and social employment opportunities. , Bloomberg

The lender expects the central bank to raise its benchmark rate by at least 75 basis points in 2022 because of mounting inflationary pressures and plans by advanced economies including the U.S. to raise borrowing costs. While higher rates may have a “cooling effect” on market transactions and price growth, the current wave of buying is largely being driven by wealthier buyers who are less sensitive to interest rates, Siphamandla Mkhwanazi, an economist at FNB, said in a note.

Total mortgage advances stood at 1.63 trillion rand ($106 billion rand) in the nine months through September, compared with 1.56 trillion in 2020, according to central bank data.

Record-low borrowing costs coupled with lower average house prices at the onset of the coronavirus pandemic “encouraged greater interest in mortgage borrowing,” the central bank said in its six-monthly Monetary Policy Review in October. “Anecdotal evidence and the elevated rental vacancy rates suggest that the favorable conditions enabled some tenants to upgrade to owner-occupiers.”

Over the medium-term, a slow recovery in the labor market of an economy where more than a third of the workforce is unemployed and rising interest rates suggests a less supportive environment for buying activity, Mkhwanazi said.