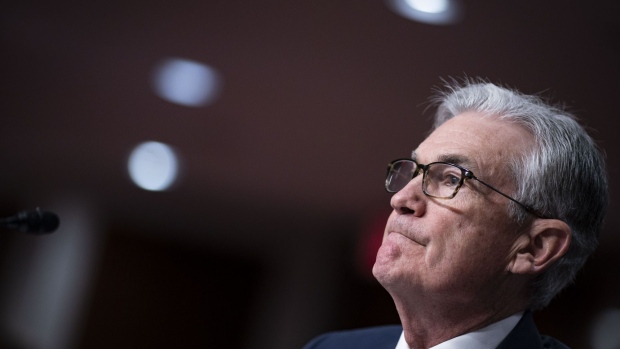 Jerome Powell, chairman of the U.S. Federal Reserve, during a Senate Banking, Housing and Urban Affairs Committee hearing in Washington, D.C., U.S., on Tuesday, Nov. 30, 2021. The Federal Reserve chair, in his first public remarks on the omicron variant of the coronavirus, said it poses risks to both sides of the central bank's mandate to achieve stable prices and maximum employment. Photographer: Al Drago/Bloomberg , Bloomberg

(Bloomberg) -- Money-market traders are now basically pricing in a full quarter-point rate hike for the June Federal Reserve meeting and there has been a noticeable flurry of activity in eurodollar option plays around that date.

Downside hedging in eurodollars -- which protects traders against increases in short-term rates -- got a jolt after Chair Jerome Powell commented on asset-purchase tapering Tuesday, and that activity has continued into the Wednesday session.