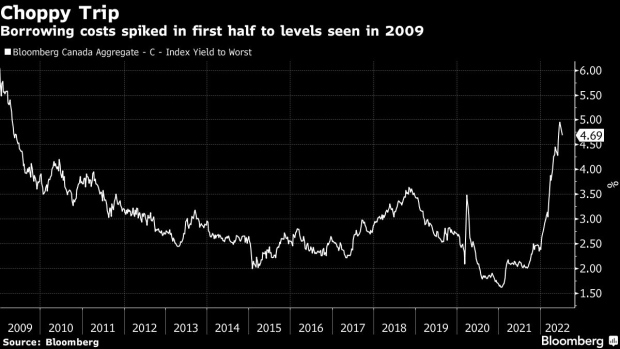 (Bloomberg) -- Corporate bond sales in Canadian dollars are likely to fall short of the record set in 2021 as companies face the highest coupon payments for new debt in 13 years and central banks worldwide battle inflation.

The record C$136 billion ($104.3 billion) of sales in 2021 tallied in data compiled by Bloomberg will be hard to reach, said bankers and fund managers at firms including RBC Capital Markets and Pacific Investment Management Co. That’s after all-in yields touched the highest levels since 2009 after benchmarks used to price borrowings doubled or tripled - depending on the duration - in the first half while risk spreads widened by 50%, according to Bloomberg indexes.

“Corporate issuance is going to be a little light going into the second half of the year,” said Roshan Thiru, head of Canadian Fixed Income at Manulife Investment Management. “The cost of capital has gone up meaningfully.”

Central banks around the world are rushing to tighten monetary policy to fight inflation as the knock-on effects of Russia’s war in Ukraine disrupt key industries from energy to food after supply lines were already stretched by the pandemic. The swaps market is almost fully pricing in a 75-basis-point hike by Bank of Canada later this month after inflation accelerated to a four-decade high in May amid record low unemployment.

Furthermore, traders are already pricing in at least seven hikes of 25 basis points each for the rest of the year, though, some of those may not happen if the economy slows and inflation recedes to more normal levels, according to economists at UBS Investment Bank.

“We think that the hiking cycle is going to last two or three more meetings,” in Canada, said Pablo Villanueva, a senior US economist at UBS Group AG, citing higher indebtedness of Canadian households versus the US. “The Canadian economy we think is going to be very sensitive to interest rate hikes.”

Investors are assessing whether the economy is already cooling down, so the unemployment data whose closest release is expected July 8 will be “very important,” said Thomas Reithinger, a fixed income manager at $2.7 trillion asset manager Capital Group. The services sector, which so far has buoyed the jobs market, will be in the spotlight.

Corporate bond sales surpassed C$72 billion in the first half of 2022, compared to C$73 billion and C$74 billion in 2021 and 2020, respectively, according to Bloomberg data, which comprises corporate bonds and structured finance transactions with an initial duration of 18 months.

Financial institutions -- whose decisions to sell debt are influenced by risk spreads -- accounted for close to 80% of the supply, up from around 50% in the comparable time periods in 2021 and 2020. Banks built up loss-absorbing buffers as well as liquidity, allowing them to deal with increasing global and domestic economic uncertainties and take advantage of the strong loan demand and merger and acquisition opportunities. That compensated for a significant decline of non-financial issuance, which tends to be driven by all-in yield levels.

“I don’t expect to do another C$70 billion in the second half of this year,” said Rob Brown, co-head of Canadian debt capital markets at RBC Capital Markets, who sees the 2022 issuance landing around C$120 billion. “Financials -- I think -- will remain relatively active, though not as active as they were in the first half of the year.”

While the non-financial supply could pick up during fall, cross-currency levels haven’t favored issuance of Maple bonds, loonie-denominated debt sold by non-Canadian firms, said Brown. And Canadian corporates with debt programs in other currencies may find better terms in the international debt markets, he added.

As borrowing costs rise, the window for companies to opportunistically issue bonds to lower borrowing costs or extend duration is smaller than in previous years, said Sean Gilbert, head of Canadian debt capital markets at CIBC Capital Markets. M&A announcements related to Canadian companies, another leading indicator of potential bond issues, is down by around 49% to C$62.8 billion year-over-year, according to Bloomberg data.

“In a normal cycle, we tend to see when rates go up, spreads tend to be the counterforce and come down and vice versa,” said Gilbert. “And this time we saw a bit of a period where both were going in the same direction. That gave a lot of companies a reason to pause and just reassess.”

The decline of issuance expectations compounded with the jump of all-in yields -- after a rare six months in a row of negative total returns -- is making corporate bonds an “attractive asset class,” Manulife’s Thiru said in an interview.

“We are at near peak levels in terms of all-in yield,” he said. “We expect a positive, healthy total return going forward for corporate bonds.”