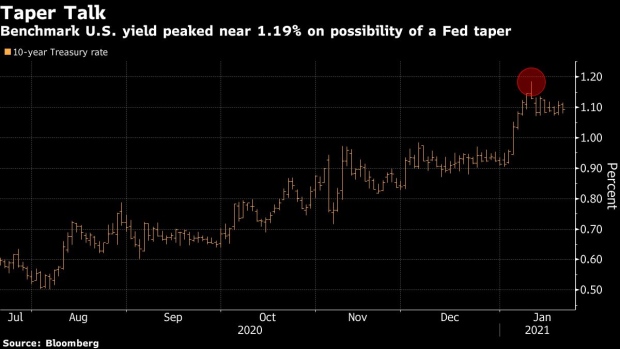 (Bloomberg) -- Rates traders say there’s one message they want to hear most from Jerome Powell this coming week: reassurance that the Federal Reserve’s $120 billion of monthly bond purchases will continue unabated for the foreseeable future.

The consensus is that the central bank’s Jan. 26-27 meeting won’t roil prices much, a view that’s reflected in muted rates-market volatility and a buildup of options positions that pay off as long as Treasury yields stay stable for the next few weeks. The risk, investors say, is that if Powell doesn’t commit forcefully enough to the status quo on bond-buying, by pushing back once again on speculation that discussions of tapering purchases may begin later this year, it may spark a selloff in longer-dated U.S. government debt.

The stakes are only growing for investors, with yields already testing 10-month highs amid expectations for additional virus-relief aid and a brighter growth outlook. The week ahead also brings another record auction deluge, underscoring why the Fed’s buying is so crucial. Of course, in the back of investors’ minds is the specter of the 2013 taper tantrum, when former Chairman Ben Bernanke’s hint of an early paring of purchases jolted yields.

“We are entering a phase where the market needs constant affirmation that the Fed is committed to not tapering,” said portfolio manager Scott Ruesterholz of Insight Investment, which oversees about $1.03 trillion. “That’s because of growing optimism on the fiscal side, which is raising the risks that the economy may rebound more quickly than expected.”

Traders are looking to Powell after the European Central Bank kept its upsized bond-buying program unchanged this past week, while the Bank of Canada articulated an outlook for an eventual paring of its asset buying.

Already, the market has turned jittery on early talk about possible tapering in the U.S. The 10-year yield reached 1.1855% on Jan. 12, the highest since March, after some regional Fed presidents indicated they’re open to paring bond purchases this year. The rate has since edged back lower after Powell sought to bat down the speculation by saying “now is not the time” to have that discussion.

On Wednesday, “Powell is going to use his press conference to really hammer home that the center of the committee is quite committed to providing accommodation and that talks to remove accommodation are premature,” Ruesterholz said. In the unexpected scenario in which the chairman doesn’t push back on taper talk, he said, the 30-year rate could shoot toward 2%, from around 1.85% now, while the spread between the 2- and 30-year yields might steepen to an almost four-year high.

Analysts see the Fed leaving policy rates unchanged near zero next week while making few, if any, major changes to its statement. The central bank is buying around $80 billion a month in Treasuries along with $40 billion in mortgage-backed securities. Policy makers are likely to forgo changes in their bond-buying program until 2022, when tapering of purchases may begin, according to economists surveyed by Bloomberg News.

For now, expectations for stable rates in both short- and longer-maturity Treasuries can be seen in elevated demand for bets that benefit from limited volatility. This past week, one trader bet on 10-year yields remaining in a range from 1.08% to 1.14% until mid-February. The wager would pay around $14 million. Meanwhile, similar short-volatility structures have emerged in eurodollar options targeting a Fed hike around mid-2024, implying policy makers will remain sidelined for the next three years.

Insight Investment sees the Fed’s presence in the bond market as “structurally containing yields,” so a rise in market rates due to either growing optimism on the economy or a “miscommunication” by Powell on Wednesday should be seen as a buying opportunity, Ruesterholz said.

“We have been using the back-up in yields to add duration and buying into the selloff over the past month,” he said.