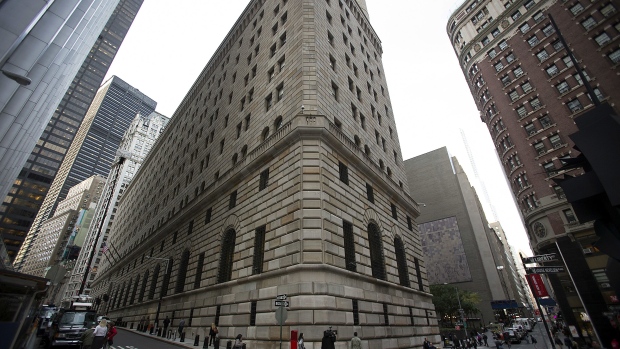 (Bloomberg) -- The market is closely reading a seemingly mundane series of blog posts by the New York Federal Reserve about implementing policy as the central bank prepares to start raising interest rates.

Co-authored by New York Fed executive vice president Lorie Logan, the daily musings seek to explain how the central bank conducts policy now. At the same time, Credit Suisse strategist Zoltan Pozsar has also been publishing musings of his own, going so far as to speculate that the Fed would adjust its so-called administered rates to accompany the first rate hike, which spurred a flurry of trades betting on this possibility.

Fed policy makers have signaled that they could start raising interest rates as soon as March. Doing so would require lifting not just the effective fed funds rate, but also a series of rates that ensure control over short-term rates. Which is why, as manager of central bank’s toolkit, Logan’s imprimatur gives the blogs some weight in the market.

The posts “make it a bit easier to anticipate how the Fed thinks about monetary policy on the very front-end of the curve,” said TD Securities interest rate strategist Gennadiy Goldberg. Lorie’s name “makes it more likely they reflect the policy framework viewed by the Fed.”

The New York Fed series and Pozsar’s note stoked pushback among fixed-income strategists about whether the Fed would use the first rate increase to realign the bottom of the fed funds target range and the yield on the overnight reverse repurchase agreement facility. A few acknowledged that it was something for policy makers to think about, but only when the hiking cycle was underway. Even Pozsar has reversed his position, noting that the New York Fed’s series of blog posts is saying “we are wrong.”

In the meantime, price action in the spreads between fed funds and SOFR OIS has been choppy over the past week, as traders react to the commentary. The spread in the one-year tenor in SOFR/fed fund OIS swaps widened to almost five basis points, the highest since June, after Pozsar’s Jan. 7 note suggested the spread should be wider than the current three basis points. Since then, it has re-tightened back to just over three basis points, almost matching the current overnight spread.