The stocks that were hammered as collateral damage in the liquidation of Archegos Capital Management are seeing a silver lining from their slump: they’re becoming investable again.

Companies including U.S. media conglomerates ViacomCBS Inc. and Discovery Inc., as well as apparel retailer Farfetch Ltd. saw a total of about US$194 billion in market value erased as banks from New York to Zurich to Tokyo unwound leveraged equity bets by Archegos.

At first, the forced selling in such a specific group of shares raised fears of potential undisclosed issues with the stocks, fueling even more losses. With that scenario now discarded, and with the dust from the Archegos blowup settling, analysts are saying investors should look at some of these names again.

“Usually these dislocations where you get forced selling for non-fundamental reasons work out to be very good buying opportunities,” said Greg Taylor, chief investment officer at Toronto-based Purpose Investments. “The counter to that is having to figure out how much of the runup was due to the buying that shouldn’t have been there either. So you have balance that both out.” 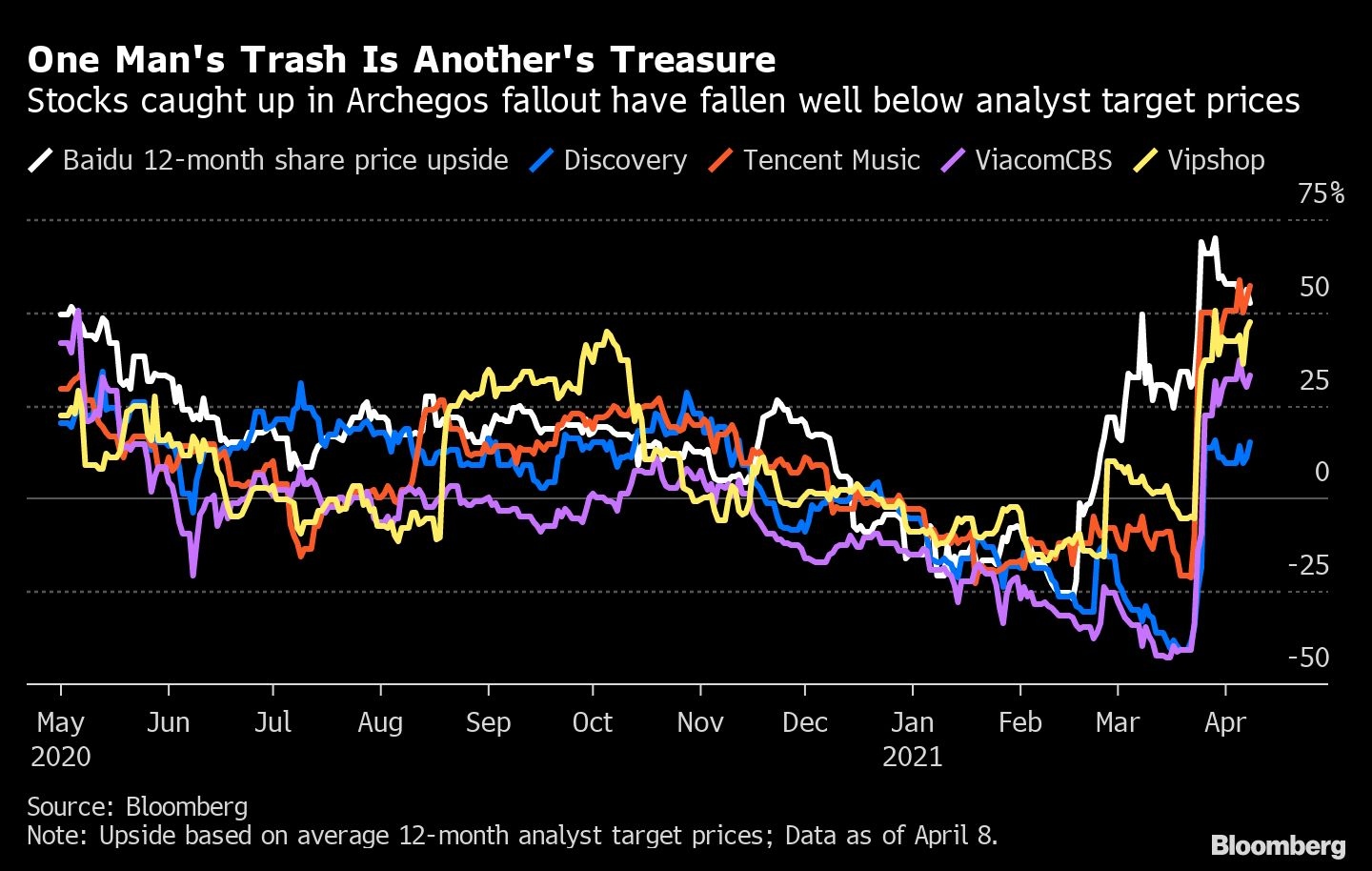 Until late in March, the company was among the top performing stocks in the benchmark S&P 500 Index, alongside Discovery, boosted in part by optimism over its streaming strategy but also thanks to a massive play by Bill Hwang’s Archegos. The fund at one point amassed US$10 billion worth of ViacomCBS shares and colossal positions in a few other companies.

Since Archegos’ blowup and after a 52 per cent drop in ViacomCBS’s stock over the course of a week -- which in turn brought its valuation down by over 50 per cent from a peak on March 22 -- at least six research firms have raised their ratings on ViacomCBS, according to data compiled by Bloomberg.

At Wolfe Research, analyst John Janedis said in a note that ViacomCBS shares are now a buy opportunity as the media company’s valuation appeared attractive after its selloff. He also pointed to its streaming business as a potential tailwind.

A similar view is also behind Deustche Bank analyst Bryan Kraft‘s decision this week to raise Discovery’s 12-month forecast to US$60 from US$35. The company’s improved growth outlook warrants a higher valuation, he noted. Farfetch also got a “buy” recommendation from JPMorgan analyst Doug Anmuth on Thursday, who said the stock delivers a “compelling buying opportunity.”

While the stocks caught at the center of the Archegos crisis are definitely hurting, they aren’t exactly cheap. Their average price-to-earnings ratio -- a measure which indicates how expensive a company is -- is in line with the 10-year median, which signals how high valuations had gotten before the selloff. Aside from ViacomCBS, Discovery and Farfetch, Chinese companies like GSX Techedu Inc., Tencent Music Entertainment Group, Baidu Inc., VipShop Holdings Ltd. and IQiyi Inc. were also caught in the crosshairs of Archegos.

Determining whether the selloff has turned a once-overvalued stock into a good buy will require some digging, said Barry Schwartz, chief investment officer at Baskin Wealth Management.

“If you’ve studied the company and you understand the business and you see this price drop as overdone, then take that opportunity to buy their shares,” Schwartz said by phone. “If you haven’t done your homework and you’re thinking this is another GameStop situation, you’re going to be the sucker at the table.”