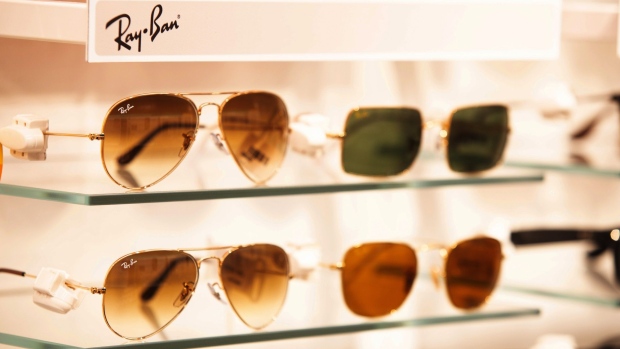 A range of Ray-Ban sunglasses, manufactured by EssilorLuxottica SA, sit on display inside a Pearle opticians store, operated by GrandVision NV, in Amsterdam, Netherlands, on Wednesday, July 1, 2020. EssilorLuxottica, the maker of Ray-Ban sunglasses, remains committed to its proposed 7.3 billion-euro ($8.3 billion) purchase of retailer GrandVision NV, people with knowledge of the matter said. Photographer: Peter Boer/Bloomberg , Bloomberg

(Bloomberg) -- EssilorLuxottica SA, the maker of Ray-Ban sunglasses, announced that Francesco Milleri will take over as chief executive officer and billionaire founder Leonardo Del Vecchio will step away from his executive duties.

The Franco-Italian company also said Paul du Saillant was appointed deputy CEO. Del Vecchio will remain as non-executive chairman, and Vice Chairman Hubert Sagnieres will stay on in that capacity while stepping away from his executive responsibilities, the company said in a statement.

The changes follow a management dispute between the French and Italian sides of the company, with a governance pact that limited the power of Del Vecchio, its largest shareholder. Milleri and du Saillant will remain in their roles until next year’s general meeting.

“I want to thank Hubert for his success in turning Essilor into a world leader and helping to build EssilorLuxottica as the strong company it is today,” Del Vecchio said in the statement.

Sagnieres said the “adjusted governance will further accelerate the integration of the company” and benefit stakeholders.

The company also reported an interim 2020 dividend payment of 1.15 euros a share.