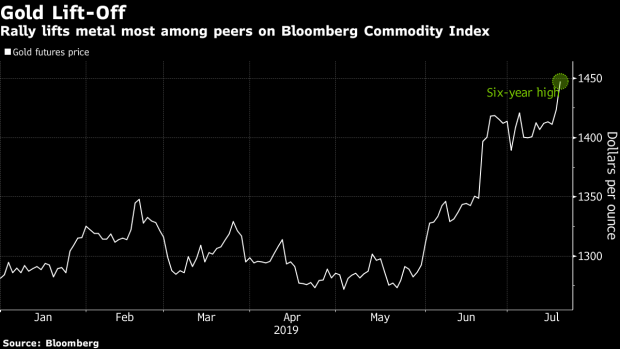 (Bloomberg) -- Billionaire hedge-fund manager Ray Dalio sent ripples through the gold market this week when he advised buying the metal, but he’s part of a bigger wave.

In the past month, banks including Goldman Sachs Group Inc., Citigroup Inc. and Morgan Stanley have raised their forecasts for bullion or touted its prospects, while holdings in exchange-traded funds linked to gold rose to a six-year high. Richard Hayes, chief executive officer of Australia’s Perth Mint, said buying by central banks is adding to the enthusiasm.

Bullion is getting more attention from institutional investors as the prospect of slowing economies, lower interest rates and rising global tensions drives demand for the metal as a store of value. Gold, which benefits from low rates because it doesn’t pay interest, has since late May generated the best returns in the Bloomberg Commodity Index.

“Safe-haven flows into the asset class in light of geopolitical risks and unresolved trade tensions continue to support the gold price,” Darwei Kung, head of commodities and portfolio manager at DWS Investment Management Americas Inc., said in an emailed report.

According to Dalio, the founder of Bridgewater Associates, stimulus from central banks that’s helped bolster asset prices is nearing its limit and having diminishing effects on economies. Such stimulus will lead to more negative real and nominal returns, spurring investors to seek alternative forms of money such as gold or other stores of wealth, Dalio said this week in a LinkedIn post.

He sees a coming “paradigm shift” in the next few years as an enormous amount of debt and non-debt liabilities such as pension and health care comes due and can’t be funded with assets. That will lead to “some combination of large deficits that are monetized, currency depreciations, and large tax increases.”

Assets “that will most likely do best will be those that do well when the value of money is being depreciated and domestic and international conflicts are significant, such as gold,” Dalio said.

Investor demand has kicked into high gear since the Federal Reserve signaled in June that it may begin cutting U.S. interest rates as early as this month to shore up growth. That could set the metal up for a fall if the Fed doesn’t follow through as investors expect. The market is currently pricing in a 50-basis-point cut, “and any change in sentiment could see a sharp reversal to the downside,” according to DWS’s Kung.

Still, Goldman analysts including Mikhail Sprogis and Sabine Schels said in a June 25 report that bullion doesn’t need fear to prosper. While a gradual brightening of prospects for the world economy in the second half of 2019 and receding worries of recession could lead to lower “fear”-driven demand for bullion, that will probably be offset by a positive “wealth” effect, the bank said.

If the rally does persist, retail investors who have largely been on the sidelines may soon join in, according to Hayes of the Perth Mint.

“It takes a little while for a rally like this to really feed into mainstream society,” Hayes said in an interview by phone. “If it is sustainable it will undoubtedly spark additional interest not only from institutions but from the average investor in the street.”