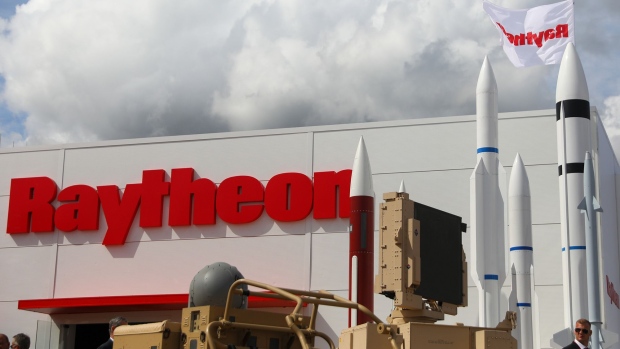 Displays of missiles stand at the Raytheon International Inc. chalet on day two of the Farnborough International Airshow (FIA) 2018 in Farnborough, U.K., on Tuesday, July 17, 2018. The air show, a biannual showcase for the aviation industry, runs until July 22. , Photographer: Simon Dawson/Bloomberg

Raytheon Technologies Corp. has slashed roughly 8,000 jobs in its commercial aviation businesses as the maker of jet engines and airliner systems contends with the travel collapse caused by the coronavirus pandemic.

The virus’s impact on plane trips “has proven to be a lot worse” than what the company originally projected just a few months ago and traffic probably won’t return to 2019 levels until 2023, Raytheon Chief Executive Officer Greg Hayes said Tuesday on a call with analysts. Some of the lost jobs will return once jetliner demand picks up, he said.

The cuts underscore the pain in commercial aviation as the prospects worsen for a speedy rebound in flying. Raytheon disclosed furloughs in May as part of a bid to preserve US$4 billion in cash and pare costs by US$2 billion, but didn’t reveal how many jobs would be affected. General Electric Co.’s aviation unit, which competes with Raytheon to supply engines for single-aisle planes, has said it would eliminate 13,000 jobs -- or about a quarter of its workforce.

“Looking ahead, we expect the pressures in commercial aerospace to persist” as aircraft production and repair work for installed jet engines remain low, Hayes said in a statement.

Raytheon fell 2.2 per cent to US$59.77 at 10:48 a.m. in New York amid broad declines in U.S. stocks. The shares fell 31 per cent this year through Monday, trailing the 27 per cent drop of a Standard & Poor’s index of aerospace and defense companies.

Almost three months after the merger of Raytheon and United Technologies, the company is a tale of two businesses with the defense operations providing a much needed cushion. The Pentagon has accelerated billions of dollars in payments to contractors to help mitigate the impact of the pandemic.

Second-quarter sales were steady at the missiles and defense unit and at the intelligence and space division, Raytheon said in a presentation. On a pro forma basis, the two defense-heavy segments each posted sales declines of less than 1 per cent in the second quarter from a year earlier, according to an appendix in the Raytheon presentation.

That blunted revenue decreases of at least 30 per cent at the company’s Pratt & Whitney jet-engine business and Collins Aerospace parts unit, which primarily cater to commercial aviation.

“Our balance sheet remains strong and the resiliency of our defense business will help us weather this storm,” Hayes said.

Adjusted earnings of 40 cents a share surpassed the 13-cent average of analyst estimates compiled by Bloomberg. Sales of more than US$14 billion surpassed the US$13.5 billion predicted by Wall Street.

Based on generally accepted accounting principles, Raytheon posted a loss of US$3.84 billion after taking a US$3.6 billion charge tied to the pandemic.