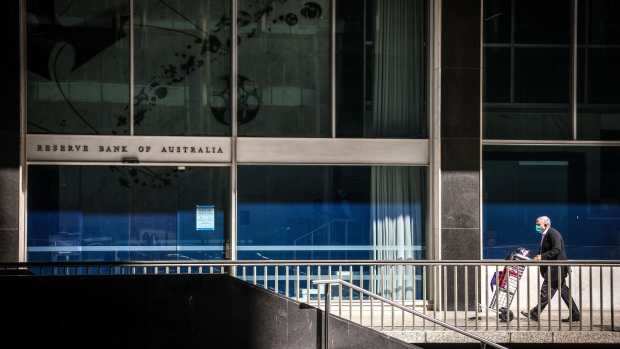 A pedestrian pushes a cart of documents past the Reserve Bank of Australia (RBA) building in Sydney, Australia, on Monday, Sept. 6, 2021. Australia's central bankers are set to revisit the question of whether to delay a planned taper of bond purchases as a worsening outbreak of the delta variant dims prospects of a rapid economic rebound. , Bloomberg

(Bloomberg) -- Australia’s central bank was forced back into defending its bond-yield target as markets challenge its sanguine view toward inflation and forecast that interest rates will remain ultra-low until 2024.

The Reserve Bank of Australia said it will buy A$1 billion ($746 million) face value of April 2024 government securities on Friday in the first such purchases since Feb. 26. The RBA is trying to defend its 0.1% three-year yield target after the April 2024 security it targets surged above 0.17% this week. The yield on the note dropped more than 2 basis points to 0.15% after the announcement.

The move demonstrates the RBA’s resolve to keep rates at record lows amid mounting global inflation pressures and expectations central banks will accelerate the unwinding of emergency support. Global policy makers are grappling with whether faster inflation is a temporary phenomenon or something more enduring.

Governor Philip Lowe has repeatedly pushed back against bets on early rate rises, pointing out that Australia’s wages growth remains subdued and there are few obvious alternative sources of inflation pressure. Markets have instead doubled-down, bringing forward bets on the first hike to mid-next year in a test for policy makers.