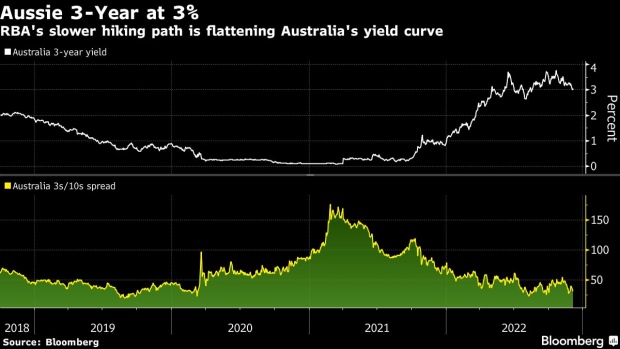 The Australian flag flies outside the Reserve Bank of Australia (RBA) headquarters in Sydney, Australia, on Monday, Dec. 4, 2017. Australia's central bank is on track for its longest stretch of unchanged interest rates as it bets a tightening job market will begin to put upward pressure on wages -- at some stage. Photographer: Brendon Thorne/Bloomberg , Bloomberg

(Bloomberg) -- The Reserve Bank of Australia is likely to go ahead with another 25 basis-point interest-rate hike today, raising the benchmark to 3.10%. That’s already a slower pace than its peers, and markets are even pricing a 20% or so chance that it either lifts borrowing costs 15 basis points to a nice round 3% or pulls a real shock by holding policy. The statement from the RBA on whether the central bank is fully ready for more pauses ahead will be key.

Whatever the RBA does — and it has already surprised markets three times out of 10 meetings this year — traders are confident the end is nigh for this tightening cycle. Assuming a 25 basis point move does happen, there’s about 25 basis points more seen after the meeting by May 2023, and then another one by October to round things out.

The country’s 3-year yield is back down to 3%, as the yield curve flattens with RBA hikes seen slowing down the economy.

October CPI was softer than expected, but the monetary authority has stressed its determined to return inflation to 2-3% target zone.

Housing prices meanwhile have been falling since May, just when the RBA started to raise rates.

Much like other nations, Australia’s jobs market has remained very strong, something that could be seen as justifying a more hawkish RBA stance.

NOTE: Ernest Tsang is a markets producer for Bloomberg TV. The observations are his own and not intended as investment advice. For more markets analysis, see the MLIV blog.