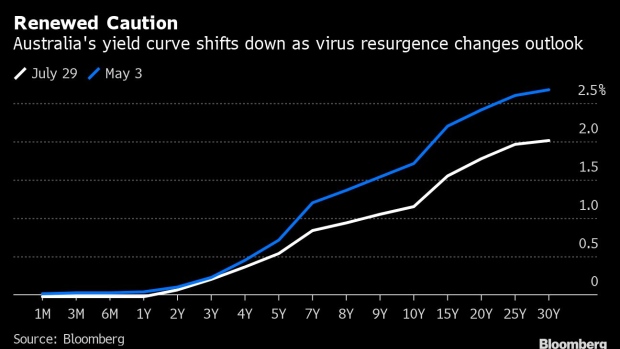 Australia’s central bank chief Philip Lowe faces the awkward prospect of having to walk back a taper announcement made only a month ago, as a resurgence of the coronavirus continues to confound the expectations of policy makers across the globe.

Lowe is expected to put off until later in the year plans to scale back weekly bond purchases, while keeping the cash rate at 0.1% on Tuesday. That’s the view of a large majority of 18 economists surveyed by Bloomberg last week. Two of them went a step further and flagged the risk of the bank also extending its three-year yield target to the November 2024 bond.

Pushing the Reserve Bank of Australia toward the brake pedal on its plans to slowly dial back support for the economy is the delta variant of the virus. A sudden upsurge in infections has dramatically changed the outlook Down Under from the optimism of a swift recovery to the gloom of extended lockdowns and a shrinking economy.

“Current Covid-19 developments and heightened uncertainty suggest the optics around beginning a taper in September are challenging,” said Su-Lin Ong, head of Australian economic and fixed-income strategy at Royal Bank of Canada.

“While continuing with the current A$5 billion weekly purchase pace is likely to have limited impact, it’s an important signal as Team Australia -- federal and state governments, the RBA and banks -- reunites,” she said.

Sydney’s delta-outbreak has reached fresh records in recent days despite five weeks under strict stay-at-home orders. With the city accounting for a quarter of output and over a fifth of employment, the central bank will likely be scrambling to adjust its forecasts ahead of a quarterly update on Friday, when Lowe and colleagues also front lawmakers for three hours of testimony.

Commonwealth Bank of Australia and Westpac Banking Corp., the nation’s top lenders, expect 200,000-300,000 jobs to be lost and unemployment to climb as high as 5.7% from the current 4.9% due to the outbreak. Both expect much of those losses to be recouped once the outbreak is contained and as vaccinations ramp up.

Sydney’s lockdown highlights the problems with Australia’s so-called Covid Zero strategy and its tardy vaccine roll-out. The economy had been at the forefront of the global recovery and was on track to achieve Lowe’s goal of unemployment around 4%, the level he hopes will spur faster wage growth and, in time, stable inflation in the RBA’s 2-3% target range.

Instead, the likelihood of another contraction is strengthening. Paring back support for a shrinking economy risks sending out a conflicting signal even if the reduction is a gentle one and there is still plenty of evidence to suggest that Australia is far from needing life support.

The economy is currently being buoyed by the high price of iron ore, its biggest export, pumped up by China’s stimulus.

Outside Sydney and Melbourne, the country is motoring and job markets are tightening. In addition, the Australian dollar -- a key target of the bond-buying program -- has fallen almost 7% in the past five months and yields are lower.

“The latest lockdowns push back the timing of eventual monetary policy normalization. We remain of the view that the RBA is unlikely to lift rates until 2024, and that the roll forward of the yield target to the November 2024 bond remains a risk.”

The economy has also been bolstered by the closure of its borders. That’s speeding labor market tightening but, more importantly, is keeping billions of dollars -- which usually leak abroad with travel -- inside the country to be spent domestically. All these are reasons why the RBA may yet stick to its tapering plans.

Yet, the central bank has shown it likes to be part of the national team and wants to be seen contributing. Part of the flexibility espoused by Lowe suggests pausing on plans for now makes sense while the RBA waits for more clarity on how hard the hit from the lockdowns will be.