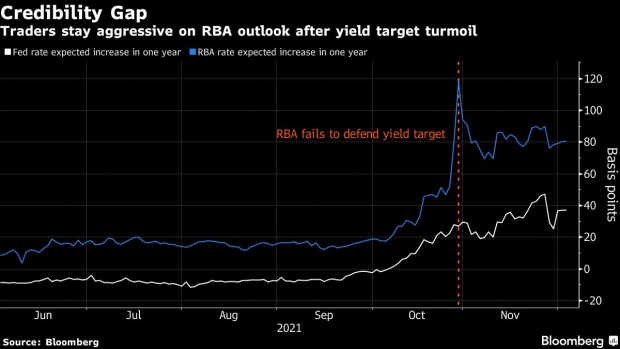 People in protective face masks walk past a closed cafe at Bondi Beach in Sydney, Australia, on Sunday, July 4, 2021. Sydney residents are being urged to comply with lockdown rules for another week amid encouraging signs Australia’s largest city is getting on top of its delta-variant coronavirus outbreak. Photographer: Brendon Thorne/Bloomberg , Bloomberg

(Bloomberg) -- Australia’s central bank is likely to highlight the interval between building economic momentum and faster price gains as well as renewed risks from a new coronavirus variant in its final meeting of the year.

All economists surveyed see the Reserve Bank holding its cash rate at a record-low 0.1% on Tuesday. On the policy outlook, markets see rate liftoff in May, well ahead of Governor Philip Lowe’s expectation of a first hike around 2024, underlining a growing disconnect between investors and policy makers.

“Australia’s economy is re-opening and a faster-than-expected recovery in activity is underway,” said Paul Bloxham, chief Australia economist for HSBC Holdings Plc. “The omicron variant is a risk, but it is too early to determine its implications with confidence.”

As a result, the RBA is seen maintaining a cautious stance despite recent data showing increasing strength in the A$2.1 trillion ($1.5 trillion) economy. Last week’s GDP report showed fallout from extended lockdowns on Australia’s east coast wasn’t as bad as feared, house prices are still climbing and card spending figures from banks suggest consumption has bounced back sharply.

But Lowe expects it will take time for improving growth to translate into faster price gains in the economy. He’s using ultra-low rates to try to drive unemployment down to 4% -- from 5.2% at present -- to spur wage rises and help return inflation “sustainably” to the mid-point of the RBA’s 2-3% target.

Traders will be looking at tomorrow’s rate statement for any steer on the RBA’s review of its bond-buying program Feb. 1, the first meeting of 2022.

The review is widely expected to see the bank scale back the weekly pace of purchases from the current A$4 billion ($2.8 billion) amid an improved outlook, supply constraints in the local bond market and signs the Federal Reserve will quicken its own taper.

Given the no-change expectation for the RBA and uncertainty over the new virus strain, it may turn out there’s more to be learned offshore, according to Su-Lin Ong, head of Australian economic and fixed-income strategy at RBC.

“Three other central bank meetings in the coming weeks will be more interesting should omicron developments deteriorate,” she said, citing the Fed, Bank of England and European Central Bank all convening the week after the RBA against the backdrop of a hawkish tilt by the U.S.’s Jerome Powell.