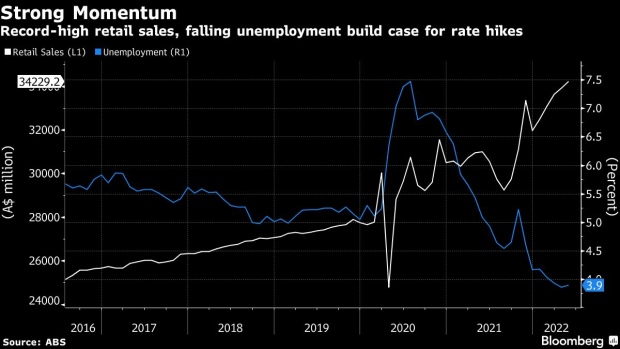 The Australian flag flies outside the Reserve Bank of Australia (RBA) headquarters in Sydney, Australia, on Monday, Dec. 4, 2017. Australia's central bank is on track for its longest stretch of unchanged interest rates as it bets a tightening job market will begin to put upward pressure on wages -- at some stage. Photographer: Brendon Thorne/Bloomberg , Bloomberg

The Reserve Bank of Australia took the cash rate to 1.35% -- the highest since May 2019 -- in a move that was predicted by all but one of 26 economists polled by Bloomberg.

Tuesday’s tightening was the RBA’s third interest-rate increase in as many months as it follows global peers in moving aggressively to prevent inflation from spiraling out of control. The Australian dollar swung from a small gain to a slight decline, trading down 0.1% at 68.59 US cents at 2:39 p.m. in Sydney. Bond yields trimmed gains.

“The board expects to take further steps in the process of normalizing monetary conditions in Australia over the months ahead,” RBA Governor Philip Lowe said in a post-meeting statement. “The board is committed to doing what is necessary to ensure that inflation in Australia returns to target over time.”

The RBA has boosted borrowing costs 125 basis points since May, piling pressure on consumers who are among the most indebted in the world. Lowe has warned that the benchmark rate may go to 2.5% while money markets pricing implies a peak this year of about 3.2%, raising concern the economy could tip into recession.

So far, consumption has been robust, with recent card-spending data from Australia’s biggest banks suggesting another solid month of sales in June. Moreover, job vacancies are at record highs, indicating further falls in unemployment that’s already near the lowest in almost 50 years.

Yet the rising trajectory for interest rates comes at a time of surging cost of living for Australian households, who have seen the debt-to-income ratio hit a record high of 187%.

“The recent spending data have been positive, although household budgets are under pressure from higher prices and higher interest rates,” the RBA statement said. “The Board will be paying close attention to these various influences on household spending as it assesses the appropriate setting of monetary policy.”

The latest home loan data out on Monday showed mortgage commitments lifted 1.7% in May, with both lending to owner occupiers and investors rising.

Economists have been rushing to downgrade forecasts for growth in the A$2.1 trillion economy in recent weeks, including a projection by Nomura Holdings Inc for a recession.

In addition, Australia’s populous eastern seaboard has been battered by torrential rain and flooding for much of this year, pushing up food prices at a time when electricity and gasoline costs are also surging.

“Today’s increase in interest rates is a further step in the withdrawal of the extraordinary monetary support that was put in place to help insure the Australian economy against the worst possible effects of the pandemic,” Lowe said in the statement. “The resilience of the economy and the higher inflation mean that this extraordinary support is no longer needed.”

(Adds comments from Lowe throughout.)