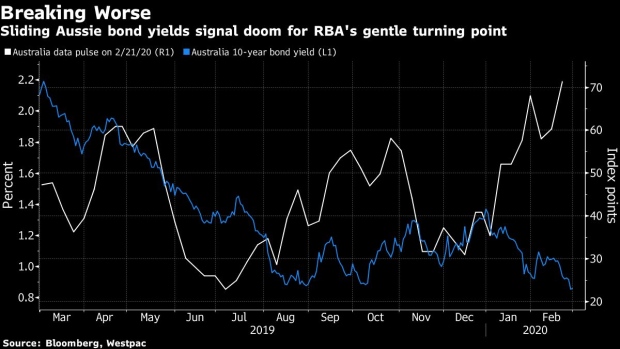 Pedestrians walk past the Reserve Bank of Australia (RBA) headquarters in the central business district of Sydney, Australia, on Wednesday, May 15, 2019. Australia's economy has been weighed down by a retrenchment in household spending as property prices slump and slash personal wealth. An election Saturday is likely to see the opposition Labor party win power and lift spending further. Photographer: David Gray/Bloomberg , Bloomberg

But that gentle upswing has been superseded by the abrupt downdraft caused by the coronavirus, leaving the Reserve Bank swept up in a wave of worry that has investors pricing in interest rate cuts from Frankfurt to Beijing.

Lowe and his board will keep the cash rate unchanged at a record-low 0.75% at Tuesday’s meeting in Sydney, economists and money markets reckon. From then on all bets are off. Traders are pricing in around a 60% chance of a cut next month and their expectations escalate from there. In the U.S., they see the Federal Reserve easing three times on concern over fallout from Covid-19.

From education to tourism to agriculture and resources, the viral epidemic will set back Australia’s economy. It is the most China-reliant economy in the developed world with about a third of its exports going there.

Markets are pricing in two RBA cuts this year, taking rates to the effective lower bound and opening the door to unconventional measures.

Lowe, who’s worried about financial stability after last year’s easing drove up home prices, may prove a reluctant cutter. One argument may be that monetary policy can’t actually do much to revive growth in the current context -- an approach set last week by the Bank of Korea.

Lee Ju-yeol, governor of South Korea’s central bank, surprised markets when he refrained from a knee-jerk cut. He said the appropriate response at this stage was targeted fiscal support for the companies most affected by the biggest virus outbreak outside China.

Australia’s government is also considering targeted stimulus for the worst-hit sectors -- a move that may impair the budget’s return to surplus.

“Patience is a virtue, and just as RBA Governor Philip Lowe was about to be rewarded -- with a diffusion of trade tensions, a turning in global growth, a rebound in Australia’s housing markets and the realization of a long-anticipated pickup in non-mining business investment -- the coronavirus hit. Its shock to the Chinese, and now global, economies looks set to derail the gentle turning point that was becoming apparent across Australia.”

The virus shock comes after a horror summer of wildfires that engulfed an already drought-stricken east coast. The RBA cut three times last year -- mirroring the Fed -- to spur firms to invest and hire in order to speed up economic growth and inflation.

The economy’s traditional shock absorber, the currency, has fallen about 7% this year and is trading at its weakest rate since 2009. This is another channel helping the RBA and trade-related industries.

--With assistance from Garfield Reynolds and Tomoko Sato.

To contact the editors responsible for this story: Paul Jackson at pjackson53@bloomberg.net, Alexandra Veroude, Malcolm Scott