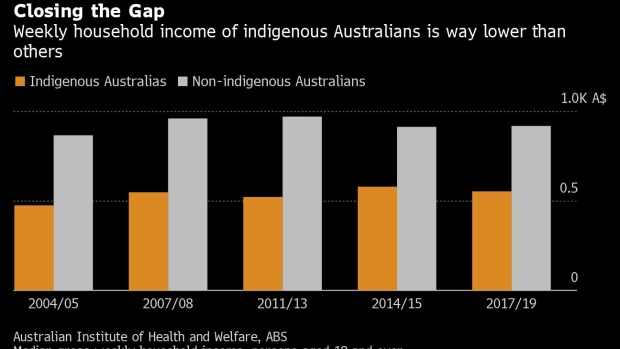 Guy Debelle, deputy governor of the Reserve Bank of Australia (RBA), attends a hearing before the House of Representatives economics committee in Canberra, Australia, on Wednesday, Dec. 2, 2020. Australian central bank chief Philip Lowe said the nation’s economy has turned a corner from its pandemic-inducted downturn, while reiterating that the recovery is likely to be a bumpy one. , Bloomberg

“There is the opportunity to deepen our understanding of the First Nations people in the Australian economy,” Debelle said in remarks Tuesday. “In our own operations -- that is, our employment, procurement and role in the community -- we have the opportunity to do more.”

The deputy governor, speaking on a panel with counterparts from the Federal Reserve, Bank of Canada and Reserve Bank of New Zealand, pointed out that indigenous Australians face lower life expectancy and worse health outcomes than the rest of the country. As a result, he said, they also see weaker labor force participation, higher unemployment and lower wealth.

Debelle’s comments underscore how economic wellbeing and inclusion are becoming increasingly important for central banks globally as they push beyond their traditional remits of inflation and employment. Policy makers increasingly view a better life for all as a key concept in a strong economy.

Debelle, who heads the RBA’s Diversity and Inclusion Council, lauded his counterparts in New Zealand, saying they set the pace in working with indigenous communities and provided a path to follow.

The RBA has established a Reconciliation Action Plan and is putting together a scholarship program for First Nations high school students to study economics and finance. It is also working with First Nations businesses and Indigenous Chambers of Commerce and will host business round tables to gain further understanding of the problems they face in obtaining capital.

The deputy governor said banking and access to finance should be areas where central banks can help communities and one where different countries can learn from one another’s experiences.

Debelle said there was also a need for better economic data to help inform policy makers on where they can have an impact in indigenous communities.

“The challenges that they are facing are pretty varied depending on which part of the country they are in. The only way we get a full appreciation of that is by going out and meeting those people,” Debelle said, underlining the importance of the RBA’s engagement program.